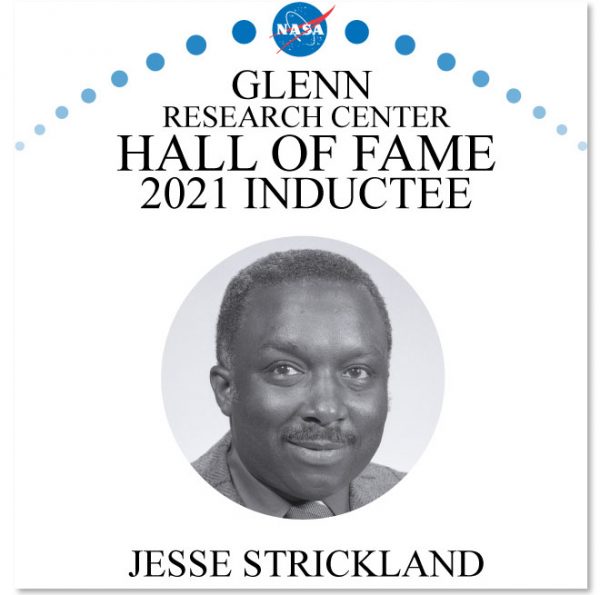 Jesse L. Strickland was an architect who specialized in breathing new life into the center’s older buildings and standardizing construction specifications across the agency.

Strickland was born in Philadelphia on April 5, 1923. Several years later his family relocated to Cleveland where he graduated from East Technical High School. During World War II, he enlisted in the Army Air Corps, where, according to his family, Strickland assisted in the drafting plans for some of the facilities at Elgin Air Force Base in Florida.

Strickland held a variety of jobs after the war, including working as a draftsman for the father of close friend Robert P. Morgan. Strickland and Morgan subsequently pursued architecture degrees at the University of Buffalo and Western Reserve University.   Morgan, who became a successful architect himself, noted, “[Strickland] had what we call a great pencil: He could draw very well.” The two later partnered on several projects.

In 1950 the NACA hired Strickland into the Drafting Section at its Lewis Flight Propulsion Laboratory in Cleveland. With the transition of the NACA to NASA in 1958 the drafting group was integrated into the new Architectural Design Branch of the Facilities Engineering Division. The branch was responsible for managing the architectural aspects of all facility design and construction projects at the center. This included both new structures and the modernization of existing buildings. They created conceptual designs, specifications, and drawings, while also providing cost estimates and supervising contracts with architectural firms.

In the early 1960s Strickland contributed to the design of the Development Engineering Building and the rehabilitation of the library in Building 60. He was also was responsible for the Space Power Facility’s architectural work at Plum Brook Station [today, Neil Armstrong Test Facility].

Strickland proposed that all NASA centers use standardized construction specifications to facilitate interactions between designers, engineers, and contractors. In January 1966 NASA authorized the use of this procedure across the agency to improve institutional processes and recognized Strickland’s contribution. The Cleveland Chapter of the Construction Specifications Institute selected Strickland as its president for 1970 and 1971. He was the first African-American to hold that position.

In the early 1970s, Strickland was responsible for the Lewis Facilities Improvement Program—an effort to renovate many of the center’s buildings that were built in the early 1940s. Strickland oversaw the modernization of the Administration Building lobby and auditorium, the Guerin House, the main cafeteria, the small dining room, the Central Control Building, and other projects. In the late 1980s he was a key contributor to the conversion of Building 15 into the Edward R. Sharp Employee Center.

In addition to his professional duties, Strickland was active in the community as a counselor and speaker. He began performing community volunteer work in the mid-1950s. He took particular interest in programs that provided training and counseling to poor or under-educated young people. He served on the board of the Blossom Hill School for Girls and the Cleveland Boys School, and held a leadership role with Youth Enrichment Services. He served as an advisory board member to the Cleveland Board of Education’s Clara Morris Work Study Program—which was established specifically to give high school dropouts a chance to complete their education.  President Richard Nixon recognized Strickland’s “excellent record of service in a wide variety of educational and civic activities in your area, particularly your work with teen-agers.”

When Lewis established its first Equal Employment Opportunity (EEO) Committee in 1966, Strickland was among its first members.  As an EEO counselor, Strickland made an effort to reach out to all new African-American employees at the center.

Strickland also gave hundreds of presentations as a member of NASA’s Speakers Bureau, often using his architectural background to discuss activities in space.

Jesse Strickland retired in 1983 after 33 years of service to the NACA and NASA.  In retirement he continued his lecturing for NASA and on his own. He became known for his “Life Beyond Earth” talk regarding space colonization. He also consulted on various architectural projects. Strickland passed away in 2011.