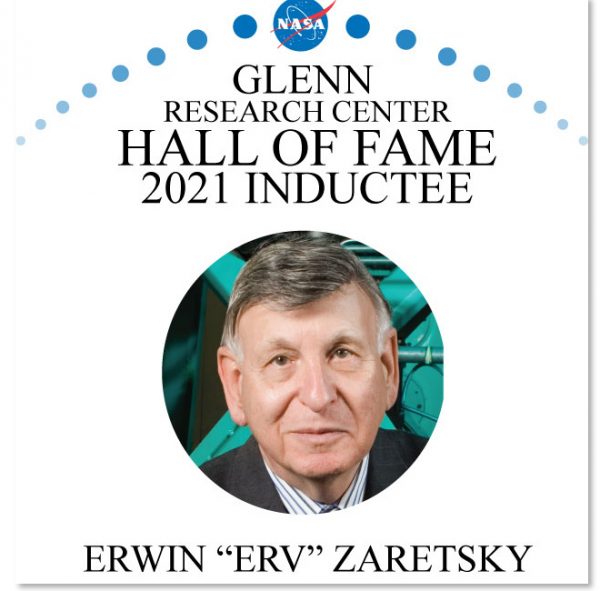 Erwin “Erv” Zaretsky is a internationally-recognized authority in the field of tribology. His groundbreaking work on rolling-element bearings, high-temperature lubrication, probabilistic life prediction, and ceramic and hybrid bearings has had direct effects on the design of aircraft, helicopters, and the space shuttle.

Zaretsky had committed to enter the Air Force Flight School after graduating from Illinois Institute of Technology in 1957. To appease a persistent professor, Zaretsky agreed to meet with officials from the National Advisory Committee for Aeronautics (NACA) in Cleveland, Ohio before beginning flight school. The interview went well and Zaretsky accepted an offer to work temporarily at the NACA on heat transfer issues. That summer Zaretsky decided to shorten his Air Force obligation by forgoing flight school and enlisting as an engineer assigned to the NACA.

After being stationed overseas, Zaretsky was detailed to the center in January 1959. He was assigned to the Bearings Section of the Fluid System’s Division under William Anderson. At Lewis, Zaretsky led an effort to increase the temperature, speed, and lifetime of ball and rolling element bearings through design and processing advances. Bearings were critical elements of jet engines, but manufacturers did not have the necessary tools to dramatically improve their performance.

One of Zaretsky’s first assignments was to bring Anderson’s concept of a multiple ball bearing tester to fruition. This Five Ball-Fatigue Test Rig accelerated the pace of bearing fatigue testing by operating around the clock for extended durations. The rig, and several others that soon followed, operated for more than 500,000 hours over 25 years and became a standard industry tool.

In 1960 Zaretsky authored the first of his 200-plus papers and accompanied Anderson to a key technical conference. The young engineer met and formed enduring relationships with several luminaries in the bearings field. These relationships influenced both Zaretsky’s research and future technical programs at Lewis. Zaretsky remained active in technical societies the rest of his career and was named an American Society of Mechanical Engineers (ASME) Fellow.

In 1965 Zaretsky, Anderson, and Richard Parker published an equation relating rolling-element bearing fatigue life to compressive residual stresses. The researchers developed a method for increasing the life of the rolling contact bearings by up to 500 percent. They continued their efforts to apply the hardness differential concept to other bearing applications.

The culmination of the group’s efforts came in 1973 with a 2500-hour, high-speed test of two ball bearings incorporating the group’s advanced technologies. Zaretsky, working with industry partners, designed a test rig to simulate the conditions inside an advanced turbine aircraft engine. The bearings operated at faster speeds, high temperatures, and significantly longer durations than typical bearings. The technology is now standard for the design of all aircraft engine bearings.  Zaretsky received Industrial Research Magazine’s IR-100 Award for this effort.

Zaretsky also studied rolling-element bearings for chemical rocket engines in the 1960s. Advanced propulsion systems use cryogenic propellants that come into direct contact with turbopump bearings. Zaretsky and his colleagues tested the rolling-element bearing components in liquid hydrogen and liquid nitrogen to determine the optimal design and the best solid lubricant. Their findings have been incorporated into rocket engine designs ever since.

In 1964 Zaretsky was named a section head within the Bearings Branch. He successfully advocated for an expansion of his section’s work to include gears and mechanical drive systems. The section, renamed the Bearing Materials and Gearing Section, designed test machines to study new designs, materials, and lubrication to improve reliability and lifespan of these components. The section created several new facilities to test gears and transmissions, including the 500-hp helicopter transmission facility.  As a result the center added drive systems to its competencies and an array of new transmission designs were developed for rotorcraft and automotive gas turbine applications.

In the early 1970s, Lewis partnered with the US Army Propulsion Laboratory on the Helicopter Transmission System Technology Program. Zaretsky’s group studied the effect of new component designs on contemporary transmissions and investigated novel, experimental transmission designs. The program, which produced over 85 papers, contributed toward quieter and more efficient transmission systems with higher power-to-weight ratios and significantly improved life and reliability.

The Lewis tribologists also expanded their efforts to include structural life prediction, particularly regarding the components for the Space Shuttle Main Engine (SSME) turbopumps. Anderson and Zaretsky warned that the SSME turbopump bearings had not been sufficiently tested for the conditions they would experience in flight, which could result in a catastrophic failure. It was an unpopular position given the pressure to get the program underway.

In 1984, Zaretsky successfully lobbied for a new policy to limit the use of individual turbopump bearings to a single shuttle flight. Zaretsky received a NASA Special Act Award for this effort. After the Challenger accident in 1986, Zaretsky led a Lewis team that assessed the reliability and life expectancy of the SSME turbopump for the next shuttle mission.

The agency requested Zaretsky’s expertise when the SSME oxygen pump bearings cracked during a December 1988 shuttle flight.  He determined that the bearing material had a stress corrosion problem that was related to the installation date and calculated that bearings installed on two other shuttles could potentially fail. Zaretsky’s forceful urging resulted in the replacement of the turbopumps prior to the next scheduled flight in February 1989.  Zaretsky’s efforts were recognized by NASA’s Manned Flight Awareness Program.

In the midst of these activities, the center terminated nearly all of its bearing and gear research and reassigned Zaretsky’s section members. Zaretsky transitioned to a new position as the Structures Division’s chief engineer, which afforded him the flexibility to write two books: “Life Factors for Rolling Bearings” and “Tribology for Aerospace Applications.” He also served on the Small Business Innovation Research (SBIR) Committee and led a 3-year joint NASA and Pratt & Whitney program to study metal matrix composite materials. During this period, Zaretsky developed a new modelling technique that incorporated the impact of random factors into life prediction tools for rotating components.

Zaretsky served as a consultant in the investigation of the Columbia accident in 2003. He determined that there was insufficient technical data on the bearings and gears for the shuttle’s brake actuators. Despite pressure to keep the Return to Flight on schedule, Zaretsky pushed for the necessary testing and inspection of the actuators which revealed several unforeseen and potentially catastrophic issues. Zaretsky led the effort to establish the proper practices and technologies to prevent actuator damage. These recommendations were incorporated into the shuttle program.

In 1998, Zaretsky was appointed to the Senior Scientific and Professional corps as a Senior Technologist, the highest rank achievable to a federal engineer or scientist. He retired in January 2009 with over 50 years at the center. In retirement, Zaretsky continued serving the center as a Distinguished Research Associate in the Rotating and Drive Systems Branch and maintained his office and extensive reference library.

In addition to his technical accomplishments, Zaretsky provided both technical and career guidance to several generations of employees. He was also very active in ASME and chaired the Society of Tribologists and Lubrication Engineers (STLE) Bearing Life Factors Committee. He has published over 200 technical papers and two books and has received over 50 NASA and professional awards, including the NASA Medal for Exceptional Engineering Achievement Honor Award (1990), the NASA Silver Snoopy Award (2004), and 4 R&D 100 Awards.