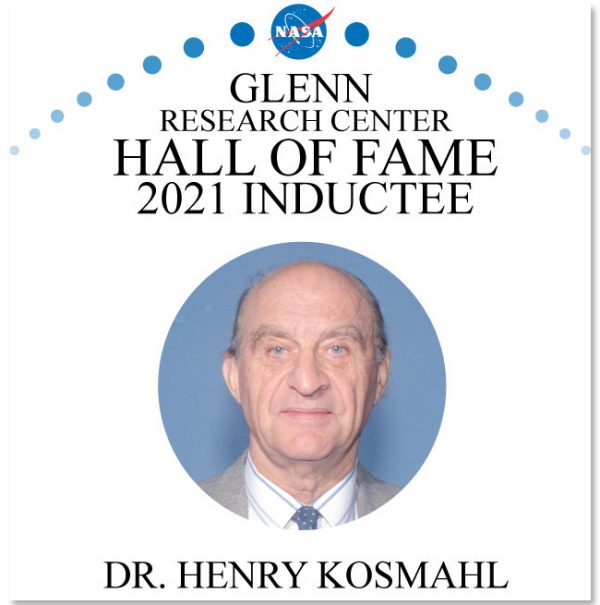 Dr. Heinrich “Henry” Kosmahl revolutionized the field of microwave tube amplifiers through the development and continual refinement of the multistage depressed collector. Kosmahl’s work has been internationally recognized internationally and led to the emergence of the Glenn Research Center as a leader in space communications.

Kosmahl was born in 1919 in Wartha, Germany. He earned a degree from the University of Dresden in 1943 and a doctorate from the University of Darmstadt in 1949, where he was an assistant professor in 1949 and 1950. He then worked as a research physicist from 1950 to 1956. Kosmahl emigrated to the United States in 1956 as Cold War tensions escalated across Central Europe.

Kosmahl joined NASA’s Lewis Research Center in Cleveland, Ohio in 1963 as a member of the Space Technology Division’s Electromagnetic Technology Section. He studied plasma accelerators, a type of electric propulsion used to propel spacecraft. He also sought to optimize the performance of magnetic brakes, in part to facilitate experiments in the center’s new 500-foot drop tower.

In 1966 the center initiated a modest communications program and tapped Kosmahl to head the new Tube Development Section. The group studied two types of tube amplifiers–travelling wave tubes (TWT) and klystrons. NASA had recently begun incorporating TWTs, which had been devised in the 1930s, into its space its early communications satellites.

In 1967 Kosmahl began developing a multistage depressed collector to be placed at the end of the tube to recycle charged particles from the tube’s electron beam. The device consisted of a series of depressed plates with openings in the center and a conical spike at the end. An electron beam was shot through the openings to the amplifier. The plates collected electrons which fell away during the transmission and recycled them back to the power source. Without the collector, these unused electrons were wasted and had to be dissipated as heat.

Kosmahl’s collector, which he patented in 1972, dramatically improved tube performance and reduced operating costs.  This resulted in larger coverage areas and smaller ground receiving equipment. Kosmahl then improved the device by developing a tool to refocus the electron beam before it entered the collector. The improved TWTs became a standard component for nearly every subsequent NASA and industry communications satellite. NASA recognized Koshmahl’s efforts in 1974 with the Exceptional Scientific Achievement Award. Kosmahl spent the rest of his career improving the performance and longevity of TWTs.

Kosmahl was named head of the Power Amplifier Section in the Applications Division in 1973. The group expanded the center’s radio transmission efforts and specialized in the development of high-efficiency tubes for communications satellites.

The center undertook a joint program with the Canadian Department of Communications to demonstrate the feasibility of using higher frequencies on the Communications Technology Satellite (CTS), which launched in 1967.  Over a three-year period, the CTS, launched in 1967, confirmed the power and affordability of high-frequency communications systems made possible by Kosmahl’s inventions.

The military was also interested in utilizing the multistage depressed collector to improve its electronic countermeasures, or “radar jamming,” capabilities. The center partnered with the Air Force in the mid- 1970s to apply Kosmahl’s collector and beam refocusing technologies to military tubes operating over a range of frequencies and power levels. The tubes used in contemporary military systems were not only inefficient but suffered thermal damage from the dissipation of unused electrons. The program focused on developing highly-efficient, low-cost designs that were small enough to install on military aircraft.

The multistage depressed collector was also used to improve the efficiency of ultrahigh-efficiency (UHF) transmitters. In the 1980s Kosmahl helped develop klystron tube amplifiers for UHF transmitters that required only half the energy of normal transmitters. The effort resulted in significant savings for public broadcasters and others using the UHF bandwidth. The Public Broadcasting Service and NASA each received Emmy Awards in 1987 for implementing the technology, and the center presented Kosmahl with its largest cash award to date for his contributions.

For most of his NASA career, Kosmahl not only pursued his own research projects, but also managed and inspired a team of that included renowned researchers such as Peter Ramin and James Dayton and a new generation of engineers that carried the center’s communications excellency forward. Kosmahl’s legacy at NASA lives on both through his innovations and the cadre of communications specialists who have followed his lead.

Kosmahl retired from NASA in 1984 after 21 years of service but continued working at the center as a Distinguished Research Associate and a NASA contractor. He served as a consultant to several large corporations and became the principal scientist for start-up AmpWave Tech LLC in the early 2000s.

Kosmahl authored over 40 articles and books and earned numerous patents for his inventions. He is broadly recognized for his revolutionary advancement of communications technology and has received a plethora of awards, including the Aviation Week Laurels Award, IEEE Technology Advancement Award,  IEEE Major Inventor Award, the Cleveland Electrical/Electronics Conference and Exposition Centennial Award, R&D 100 Award, and most recently, induction of the TWT into the Space Technology Hall of Fame, 2020.

Kosmahl passed away in September 2011.