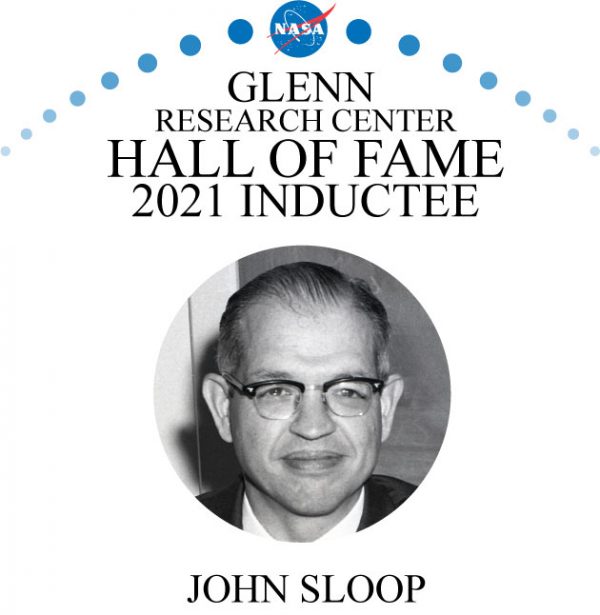 John L. Sloop led the center’s efforts in the 1950s to understand basic rocket engine principles and determine optimal high-energy fuels. This led to the utilization of liquid hydrogen in the Saturn and Centaur upper-stage rockets in the 1960s.  Sloop was a key figure at Headquarters that decade, selecting the original launch vehicles for the space program and managing power and propulsion work at the research centers. In the 1970s, Sloop meticulously documented the history of liquid hydrogen development, emphasizing the research performed at the Lewis Research Center.

Sloop joined the center as a research engineer in 1941.  During World War II, he investigated spark plug ignition. After a major reorganization at the end of the war, Sloop found himself, literally overnight, among a small group within the Combustion Branch studying rocket propulsion issues such as cooling, combustion, and thermodynamics. The group’s small size and the aeronautical agency’s lack of support for rocket work provided the group a great deal of autonomy. They decided early on to focus on the relatively unexplored field of high-energy liquid propellants. Theoretical analysis of various potential fuels was followed up by testing in small 100 pound-thrust engines in the rudimentary test cells of the new Rocket Lab facility.

Sloop was the group’s primary spokesperson in front of various committees and at events such as the NACA Inspections. When the rocket work was expanded in 1949, Sloop was selected to lead the new Rocket Branch. Sloop became a rocket propulsion proselytizer in the 1950s, speaking frequently at staff seminars, technical conferences, community meetings, and in classrooms.

During Sloop’s first 5 years, the branch doubled in size to 25, received funding for the Rocket Engine Test Facility, and obtained a liquefier to create liquid hydrogen. Sloop was the NACA representative on the Subcommittee on Rocket Engines from its inception in 1950 to its termination in 1958. At a NACA conference on fuels in January 1950, Sloop stated that liquid hydrogen, in combination with either oxygen or fluorine, would provide the best performance for missiles. This was the center’s first statement to the larger community on hydrogen’s potential. Lewis’s first successful liquid-hydrogen–liquid-oxygen run was completed in November 1954 with a 5,000-pound-thrust rocket engine.

Lewis Associate Director Abe Silverstein began closely following the hydrogen studies in the mid-1950s with an eye on possible aeronautical applications. So, did others, including representatives from Pratt & Whitney and individuals who would become members of Defense Advanced Research Projects Agency (DARPA). At the NACA’s key Flight Propulsion Conference in November 1957, not long after the Sputnik launch, Sloop led a team that presented a paper that discussed high-energy propellants and their application for a range of missions—including missiles, satellites, and a lunar landing.

In the late 1950s Sloop’s group expanded its research to include pumping and storage of the cryogenic propellant, and he helped review new rocket engine proposals. In 1959, Administrator T. Keith Glennan personally thanked Sloop and his team for their technical assessment of proposals for a 1-million-pound-thrust rocket engine.

In 1958, Silverstein transferred to Headquarters to serve as director of Space Flight Programs and coordinate the new NASA space agency. In this position, Silverstein, with his knowledge of Lewis’ hydrogen work, convinced Wernher von Braun and others that hydrogen-powered upper stages were necessary for the Saturn vehicle.

In 1960 Silverstein brought Sloop to Washington D.C. to serve as his technical assistant. Sloop participated in committees reviewing launch vehicles, including Saturn, and planning the Apollo missions. In 1961 Sloop was named deputy director of Launch Vehicles and Propulsion Division where he managed the Scout, Delta, Atlas-Agena, and Atlas-Centaur vehicles. Sloop’s critical review of General Dynamics’ work on Centaur in 1961 led to NASA taking greater control over the program.

As the director of Propulsion and Power Generation in the Office of Advanced Research and Technology (OART), Sloop managed solid and liquid rockets and on-board space power. In 1964 he was promoted to assistant associate administrator of Advanced Research and Propulsion which managed the work on aeronautics, space vehicles, propulsion, electronics, and basic research at NASA’s three research centers. Sloop retired in 1972 after 31 years of NACA and NASA service.

Sloop remained active with speaking engagements while at Headquarters, although the subject matter had expanded. With the success of the Apollo Program, Sloop was asked in 1971 to prepare a conference paper on the development of liquid hydrogen in the 1950s. The resulting paper included a bibliography with over 200 reports and references. NASA historian Eugene Emme recommended that Sloop develop a hydrogen timeline that could be published in the NASA chronology series. Realizing the topic was far too broad for a single timeline, Sloop convinced Emme to sponsor a full history of hydrogen development.

Sloop threw himself into the project, and the scope of the history soon expanded far beyond the work of the NACA. Sloop traveled the country interviewing key people, constructing various subject timelines, and gathering documents from individuals and institutions. After nearly 5 years of effort, the 325-page “Liquid Hydrogen as a Propulsion Fuel, 1945-1959” was published in 1978.

The book’s focus on a single technology was unique to NASA histories at that time. Sloop attacked the liquid hydrogen subject from a variety of novel angles, including early German work, post-war studies at other U.S. institutions, the military’s role, the secret Project Suntan, and the selection of hydrogen for the Saturn stages.

Nonetheless, the hydrogen work at the Lewis laboratory and Silverstein’s critical role in its adaption for the space program remain central to the narrative. “Liquid Hydrogen as a Propulsion Fuel” was the first publication to discuss the center’s history since George Gray’s “Frontiers of Flight” 30 years before. It has been an important resource for nearly all subsequent Glenn histories and is cited in an array of other NASA histories, technical papers, and articles.

Sloop published 45 documents and wrote over 100 unpublished talks and papers.  He co-founded and once headed the Cleveland-–Akron Section of the American Rocket Society. Sloop was an American Institute of Aeronautics and Astronautics (AIAA) fellow.  He shared the AIAA’s 1974 Goddard Award for “for significant contributions to the development of practical LOX-hydrogen rocket engines which have played an essential role in the national space program and in the advancement of space technology.”