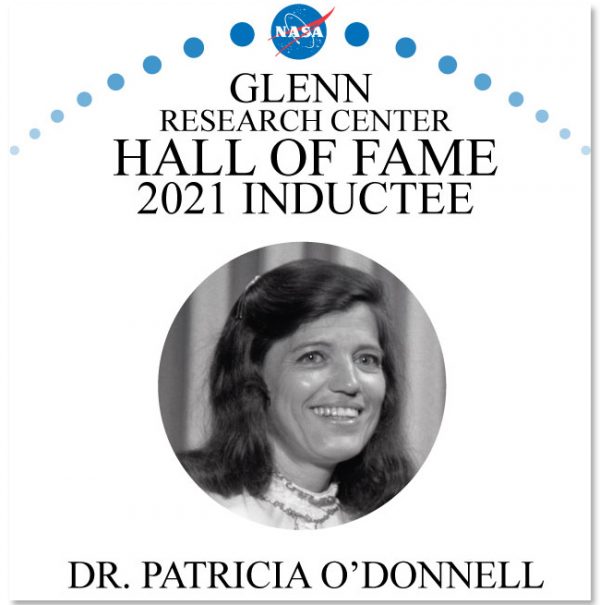 Dr. Patricia M. O’Donnell was a leader in energy conversion and storage at the Lewis Research Center for 44 years. She researched the conversion of high-energy propellants to produce rocket thrust, the conversion of solar energy to electrical power, and the storage of converted energy in batteries.

After earning her bachelor’s and master’s degrees from Case Western Reserve University, O’Donnell joined the NACA’s Lewis Flight Propulsion Laboratory in 1954 as an analytical chemist in the Propulsion Systems Division’s Fuels Chemistry Section.  The section was unique at the time in that women occupied four of its seven research positions.

The group analyzed a variety of high-energy liquid chemicals to determine their viability as propellants. The sought to determine how these chemicals, some of which were toxic, reacted with various materials and other chemicals. Initially, O’Donnell contributed to the study of a boron derivative, referred to as HEF-–2, for the Navy-sponsored Project Zip. The investigation determined that this particular derivative was unstable, especially in the presence of oxygen.

In 1960 O’Donnell was transferred to the Chemistry Energy Conversion Division’s Electrochemical Conversion Section. There she embarked upon a 15-year analysis of fluorine. Fluorine had superior theoretical potential as an oxidizer, but its corrosiveness posed significant issues. O’Donnell studied fluorine’s reaction with a variety of metals used to construct propulsion systems. She went on to study the use of fluorination (coating the metal with a small amount of fluorine prior to engine ignition) to lower the corrosiveness.

O’Donnell later analyzed the potential use of fluorine to extract oxygen from simulated lunar materials to support potential sustainable life systems for Moon bases. O’Donnell’s fluorine work yielded roughly 20 papers, a doctoral thesis from the University of Akron, and a patent (the center’s first by a female).  The research also earned her international recognition and invitations to lecture in Poland and Japan.

In 1976 O’Donnell served a 1-year detail in the Solar Energy Division at NASA Headquarters as NASA began studying terrestrial power systems in response to the energy crisis. She returned to Lewis the following year and began a new career in power systems as part of the Redox Project Office. Lewis researchers created the Redox system to store wind and solar-generated energy. O’Donnell was the integration manager for the successful demonstration test of the Redox system in 1979.

O’Donnell then became a member of the Terrestrial Photovoltaic Projects Branch which partnered with external organizations to install NASA solar-power units in remote, impoverished villages. O’Donnell contributed to the establishment of power systems on the Papago Indian Reservation in Arizona and at a site in Gabon, Africa. She also served briefly as project manager for Lewis’ effort to develop solar-powered vaccine refrigerators for the Centers for Disease Control.

O’Donnell shifted her focus to power systems for space applications in 1983 as head of the Space Propulsion Technology Division’s Electrochemistry Fundamentals Section. In 1986 O’Donnell became deputy chief of the Electro-Chemical Technology Branch, where she managed 17 engineers working on fuel cells and batteries for space applications, including the International Space Station.

Nickel–cadmium fuel cells and batteries were performing poorly during pre-mission validation tests at the time. O’Donnell and Marvin Warshay contributed to a study that found improper storage of fuel cells caused degradation of separator material which resulted in internal shorts. The findings led to new NASA procurement policies and technological options.

In addition to her technical and managerial accomplishments, O’Donnell helped pave the way for women in the center’s research community. She was also active in the center’s social activities and Business and Professional Women’s Club.