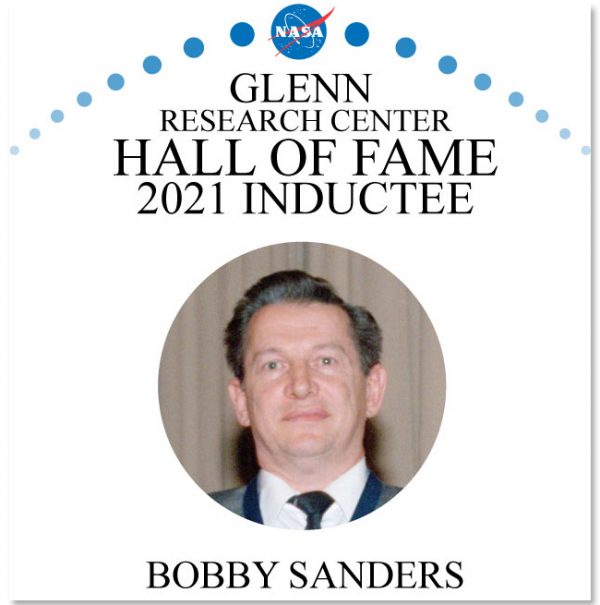 Bobby W. Sanders was a nationally-recognized leader in the advancement of engine inlet technology for over 50 years. He was engaged in the conceptualization, design, and testing of a diverse array of inlets for both military and commercial applications.

One of Sanders’ first assignments was the aerodynamic shroud testing for the Mariner-C spacecraft and the Atlas-–Agena launch vehicle. The tests verified the dynamic performance of the oversized shroud and vehicle. Sanders went on to compare the data with similar tests of the Agena/Lunar Orbiter shroud. Sanders also performed wind tunnel testing of the Apollo Command Service Module and its escape tower. The tests determined the effect of the escape tower’s control flaps on its overall aerodynamic stability.

As the center reorganized in the mid-1960s to increase its aeronautics research, Sanders became a member of the Inlets Section in the new Wind Tunnels and Flight Division. Initially, this group focused on issues related to supersonic transport propulsion systems. Sanders helped prepare the center’s F-106 Delta Dart to support this research effort.

During this period, Sanders developed and tested many inlet bleed geometries and bleed airflow control strategies in the center’s wind tunnels to increase the range of stable airflow in supersonic mixed-compression inlets. This led to the development of bleed systems for supersonic inlets that improved performance and increased stability.  The inlet bleed system, which draws small amounts of air from the inlet’s porous surfaces, stabilizes the supersonic shock wave system in order to maximize performance. It also mitigates disturbances in the incoming airflow and in engine airflow demand. This reduces flow through the compressor to prevent stall and choking. Sanders and Glenn Mitchell patented a passive-bleed airflow control system in 1971.

Subsequent testing of this passive-bleed control system on an inlet from the SR–71 aircraft in the 10×10  demonstrated that the bleed system significantly increased inlet stability. Sanders’ inlet bleed stability research has been fundamental to the development of many subsequent high-speed inlet designs.

The center reorganized in 1983, and Sanders became a member of the Aerodynamics and Engine Systems Division. There he led a joint NASA and industry team that supported the design of a supersonic cruise demonstrator aircraft by investigating technological issues in the largely ignored Mach 3 to 6 range. Several agencies used data from testing of the vehicle’s ramjet engine inlet in the 10×10 to validate computations fluid dynamics (CFD) predictions. It was the first demonstration of a large-scale, high-performance, Mach 5 cruise inlet.

In 1986, Sanders was named deputy chief of the Propulsion Systems Division’s Hypersonic Technology Branch. The branch was responsible for performing analysis and testing of hypersonic inlets, nozzles and combustors to support the National Aerospace Plane (NASP) program.    Sanders defined the parameters for the NASP inlet/combustor combination and led a series of research tests that provided definitive information on inlet performance and interaction issues.

Sanders also initiated the center’s study of a variable diameter centerbody (VDC) inlet for supersonic propulsion. He designed an inlet diffuser using a folding-leaf mechanism for the variable diameter centerbody, a configuration that offered high performance and stability. The innovative system provided the required area variation while permitting inlet bleed without leakage and maintaining acceptable aerodynamics in the diffuser. The inlet was successfully demonstrated during wind tunnel testing as part of the High-Speed Research program.

Sanders received awards for his contributions to the VDC inlet, Mach 5 inlet, and NASP program.

In 1996, Sanders was named chief of Inlet & Propulsion Airframe Integration Technology Branch. He retired later that year after 33 years at NASA.

Sanders was not finished with inlets, though. He founded TechLand Research Inc. where he collaborated with NASA, the military, and industry for another 20 years. At TechLand he conceived several new designs, including an external-compression supersonic inlet, a variable geometry concept supersonic cruise inlet, a rotary airflow control valve and isolator for a pulse detonation engine (PDE), and an over-under dual-flow hypersonic inlet.

Sanders patented three more inlet concepts, a bleed valve concept, and the PDE valve during his time at Techland.  He was among those receiving NASA’s Steven Szabo Engineering Excellence Award in 2005 and Distinguished Publication Award in 2009.