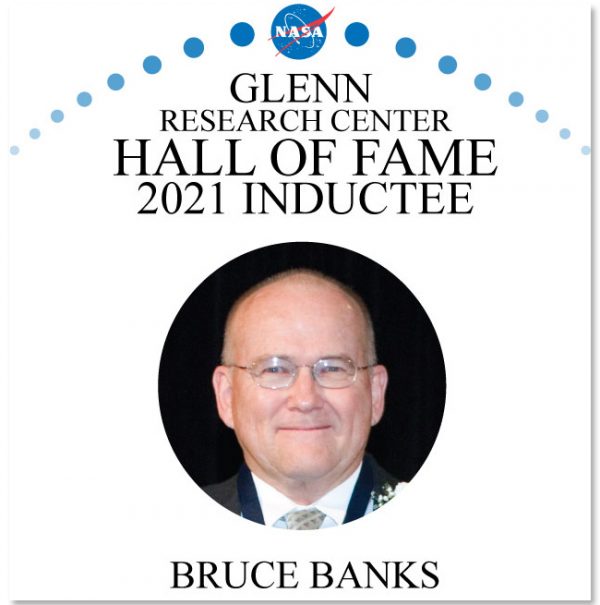 Bruce Banks not only made significant contributions to NASA’s efforts in electric propulsion, thin-film coatings, surface texturing, and atomic oxygen protection, but he also had the uncanny ability to find an array of alternative uses for these technologies in the private sector.

Growing up in Rocky River, Ohio, Banks possessed an intense curiosity about how things worked and why things occurred. He earned his Bachelor of Science degree in physics from Case Institute of Technology in 1964 and a Master of Science degree in physics from the University of Missouri at Rolla in 1966. Banks worked briefly as a developmental physicist at General Electric before joining NASA’s Lewis Research Center in June 1966.

In 1972 Banks was named head of the Small Thruster Section. This group investigated auxiliary propulsion applications for ion thrusters, such as satellite station-keeping. He developed a device that measured the flow of liquid metal by passing it through an electric field.

While working in electric propulsion, Banks determined that ion beams could also be used to modify surfaces and coat materials. In 1976 he became head of the Ion Beam Applications Section, which studied non-propulsion used of ion thrusters. Banks collaborated with medical professionals to study the use of ion beams to create unique textures on materials for prostheses and surgical implants. Studies revealed that the body accepted these modified devices at higher rates. He also utilized ion beams to create diamond-like carbon films for use in sunglasses, strain gauges, and star-trackers. Banks received the 1980 Arthur S. Flemming Award for his efforts in applying space technology to medical devices.

In 1985 Banks was named Chief of the Electro-Physics Branch. This team was responsible for developing new materials for space power applications, but Banks continued his technology transfer efforts as well. The branch was responsible for a large percentage of the center’s technology transfer, and in 1988 Banks was recognized nationally for identifying potential commercial uses for intercalated graphite composites and transferring the technology to industry.

Atomic oxygen poses one of the biggest challenges for long-term space missions. Single oxygen atoms, naturally found only in space, corrode and weaken external components. In the 1980s Banks and James Sovey developed different protective coatings for polymers used to create thermal blankets for spacecraft. Banks’ Electro-Physics Branch expanded upon this work in the 1990s. They developed a silicon dioxide thin-film coating that successfully protected the space station’s solar arrays. This prevented the costly process of periodically replacing the blankets, which NASA later estimated would have cost the agency more than $15 billion. Banks and Sovey along with colleagues Sharon Miller and Michael Mirtich received a $40,000 Space Act Award in 2001 for their efforts.

Banks’ team also studied coatings for the Hubble Space Telescope. In 1992 they quickly evaluated various coatings for the telescope’s thermal shields prior to the first Hubble servicing mission. They conducted similar studies for four additional repair missions and were key contributors to the 1997 investigation of a Hubble insulation failure.

In the early 1990s Banks and Miller investigated ways to apply the damaging characteristics of atomic oxygen toward beneficial uses on Earth. These applications included the sterilization of medical implants, decontamination of aircraft components, and improvement of seals. They also found that atomic oxygen could be used to remove soot and other contaminants from artwork without injuring the pigment. In 2002 Banks and Miller won an R&D 100 Award and the R&D 100 Editor’s Choice Award for Most Innovative New Technology for use of atomic oxygen for art restoration.

Banks was responsible for dozens of experiments flown on the space shuttle and space station over the years. Banks has been the principal investigator or co-investigator for over 20 Materials International Space Station Experiment (MISSE) space exposure experiments flown on the exterior of the International Space Station since 2001.

Banks retired in 2007 after 41 years at NASA, but he continued his materials work as a NASA contractor. In 2009 he and Miller received a Federal Laboratory Consortium award for Excellence in Technology Transfer.

Banks has published 258 technical publications and 34 technical briefs. He has received more than 120 invention and meritorious performance awards from NASA and other organizations. His 39 patents are the most by earned by an individual in center history.

In addition to his many outstanding technical contributions, Banks also served as a valued mentor to dozens of researchers over the course of his career. His legacy of technology innovation and professionalism continues on through the work of the many engineers and scientists whose careers he nurtured.