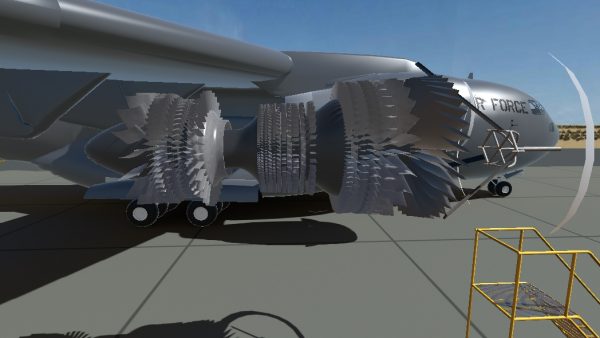 The ingestion of volcanic ash by commercial aircraft engines is a safety issue that, until recently, hadn’t been studied in a controlled way. Volcanic ash forms glass in the hot sections of engine—reducing flow and clogging cooling holes—as well as erodes compressor blades and other parts of the engine. The NASA Vehicle Integrated Propulsion Research (VIPR) tests studied these effects by sending volcanic ash through an airplane engine under controlled conditions.

The GVIS Lab created a stereoscopic 3D visualization of the test, in order to demonstrate the equipment used during testing and to explain the risks posed by volcanic ash ingestion. The user is placed on a tarmac next to an Air Force C-17 cargo plane where a rig similar to the one used in the VIPR test is positioned to blow ash into one of the aircraft engines. With the engine running and the ash being ingested, the user is presented with a cross-section of the engine, where they can see the location of probes used in the actual test. Zooming in on the rotor stages show the compressor blades being eroded by the ash. Likewise, zooming into the section just aft of the combustion area shows the accumulation of ash “glass”. This visualization provided a valuable way to explain both the effects of volcanic ash ingestion on engines as well as the work being done by NASA to study it. 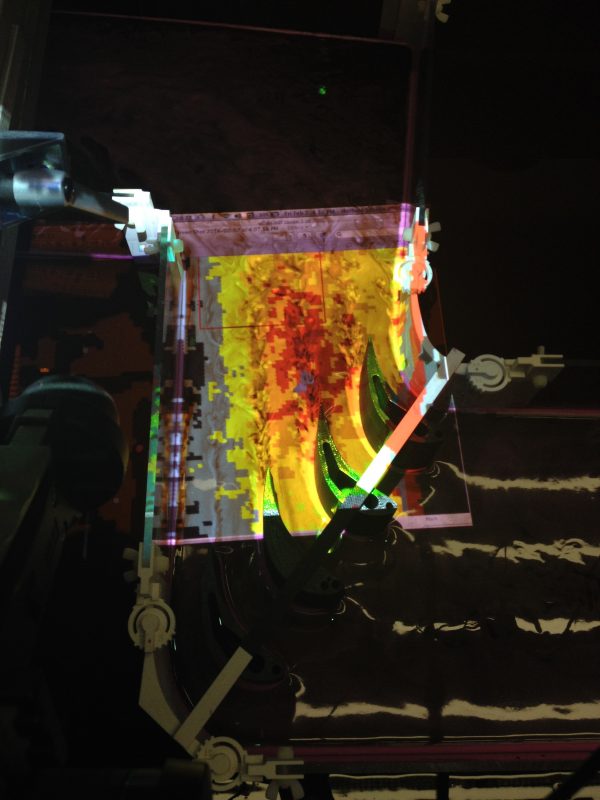 The Turbomachinery and Turboelectric Systems (TTS) branch at NASA’s Glenn Research Center uses a water tank to test certain projects. The test article is submerged within the tank and then dye is added to collect water flow data. The entire system works similarly to any of Glenn’s wind tunnels except with water instead of air. Although the dye is useful for observing the movement of the water, it can not determine its height. If the height of water in any area of the tank is known, the pressure of that area can also be calculated. In turn, knowing the water pressure can provide valuable insights from any given test article.

To help the TTS branch, the GVIS Lab designed a program for the Xbox Kinect that could determine the topography of the water and then project and color-code that data back onto the water in real time. This gave TTS a visual representation of the water pressures in the environment of their test article. 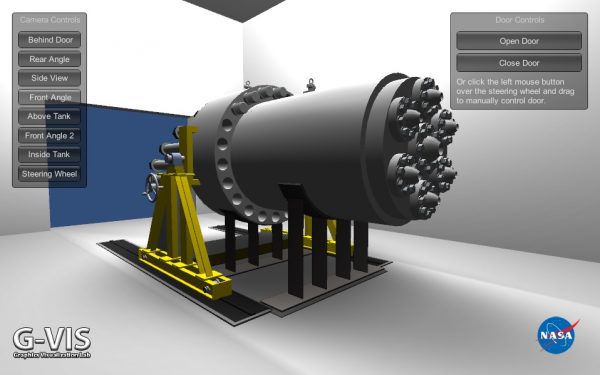 The Glenn Extreme Environments Rig (GEER) is an extreme environment test chamber that creates the high-temperature, high-pressure, toxic atmospheric conditions found in extreme environments such as the planet of Venus. The largest test chamber of its kind in the country, it can simulate temperatures of up to 1,000 degrees Fahrenheit and atmospheric pressures 100 times that of Earth.

GVIS Lab created a virtual reality simulation of the test chamber for illustrative and demonstration purposes. The initial release of this virtual test chamber visualizes the chamber itself, allowing the user to explore it from various pre-set camera positions and to operate the large chamber door. GVIS Lab has also added support for the Oculus Rift so that users can experience the test chamber in 3D. The visualization also operates well with touch screens such as the Perceptive Pixel. 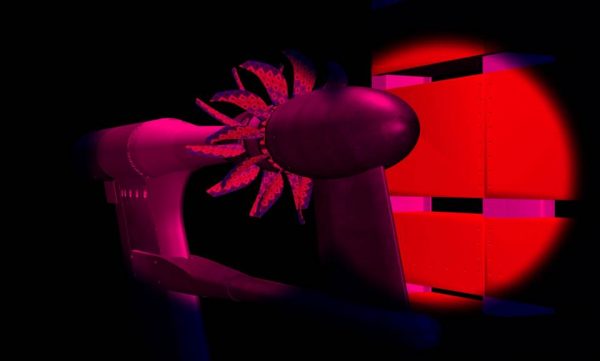 This simulation mimics the pressure sensitive paint (PSP) testing that was performed during an Open Rotor Engine test. It guides the user through various stages of the testing process, which includes the demonstration of the technology, the marketing of the technology, and the gathering of data. The main display utilizes passive 3D technology and audio to provide an immersive experience for the participant. User interaction is controlled by a secondary touch-screen display in front of the main 3D screen.

The user begins the simulation by initiating a wind tunnel test. Air then flows through the tunnel and the engine test article starts. To prepare for data acquisition, the user then sets up an ultra-violet light and then tunes the frequency of the strobe to illuminate one specific test article blade. Simulated data from the test follows shortly. 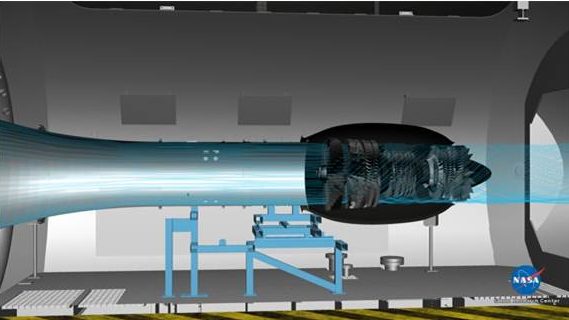 The simulation is geared toward marketing the facility’s new capabilities and providing a lightweight and immersive educational tour of facility operations. It steps the user though a virtual test run of an engine icing experiment. Spray-bars that are installed within the real-world tunnel work in tandem with the airflow to simulate conditions in Earth’s atmosphere that would cause ice to form within the interior of an aircraft engine. The simulation goes into detail on how this ice formation can impact the inner workings of the engine by displaying an animated 3D cross-section of the phenomenon in progress.

This visualization allows future facility simulations to benefit from the design and code developed for this project. Additionally, it helps foster discussions about engine icing within a Glenn context. 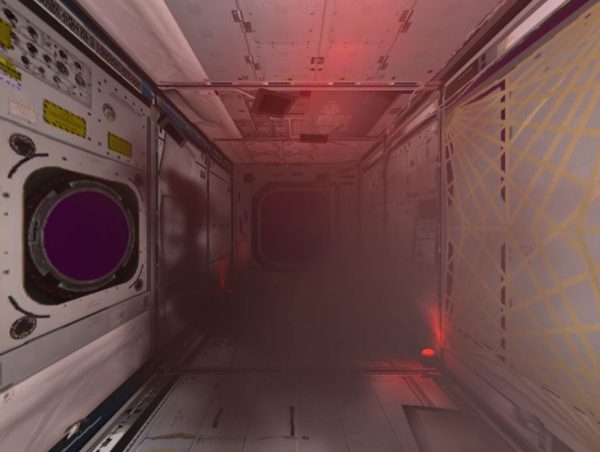 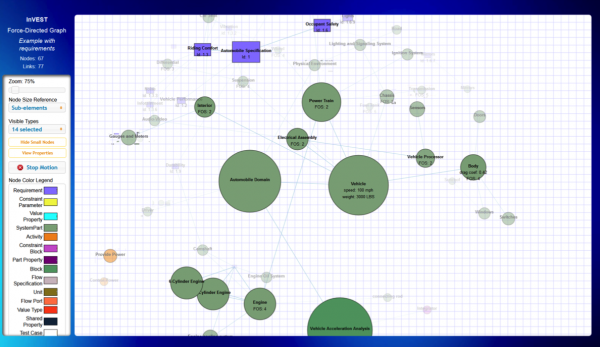 The Interactive Visualization Engine for SYSML Tools (INVEST) was a demonstration of how project models could be made more accessible to project managers and other non-systems engineers. Systems engineers use a common SYSML modeling tool that is powerful but has a steep learning curve, making it difficult to quickly communicate status to project members unfamiliar with it. To mitigate this problem, GVIS Lab developed several D3-based visualizations that could be accessed through a web browser. Snapshots were taken of portions of a model by using the reporting tool to generate JSON files, and then used D3 to visualize the data as interactive web pages called “dashboards”, depicting a force-directed graph, dependency wheel, relationship matrix, and others. Users could zoom the displays in or out, choose which data was visible, and highlight areas, with simplified controls that were much easier to use than the original systems engineering application. 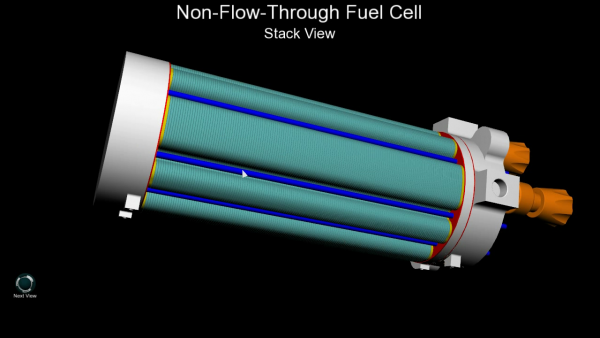 The Virtual Fuel Cell Interactive Simulation used a physics-based gaming engine to visualize the chemical reactions that occur in a fuel cell.

The Space Power Facility (SPF) at NASA’s Plum Brook Station requested that a visualization be made of the inner workings of a fuel cell. The main purpose of this simulation is to educate the public on how the chemical and electrical processes of fuel cells work together to produce power. Additionally, the simulation demonstrates the issues that arise when chemical impurities are introduced into the system and proposes a design solution to overcome such a challenge. This project is currently displayed at the Great Lakes Science Center in Cleveland, Ohio. 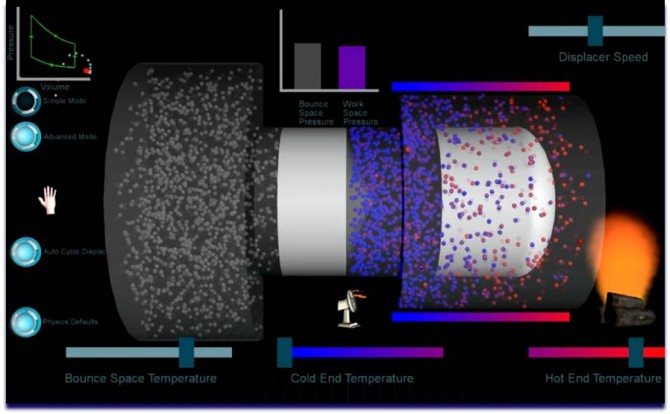 A realistic and interactive 3D Stirling Engine was modeled for customer outreach and educational purposes.

The virtually modeled engine is fully functional and depicts the inter-workings of the system, including gas compression and flows, thermal heat transfers, power generation, and general system power-generating functionality.

The GVIS team and the Cleveland Clinic, under a Space Act Agreement, formed a partnership to study the use of immersive 3D environments for activating mirror neuron networks in the brain through motor imagery training. The study focused on improving social interactions in persons with autistic spectrum disorders. The study took place in the GRUVE Lab.

GVIS Lab, using a motion capture system at the Center’s Exercise Countermeasures Lab, created visualizations of people doing simple activities which were then displayed in the GRUVE Lab while a patient wore an EEG headset. 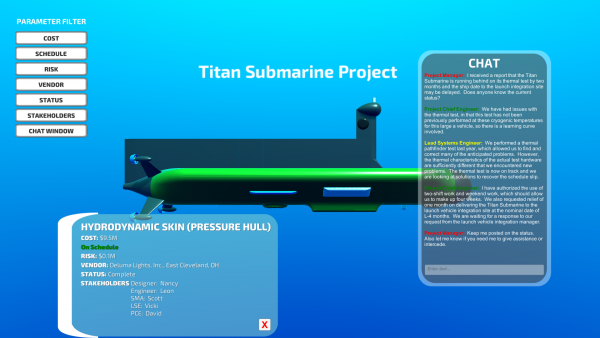 The Augmented Images of Remarkable and Integrated Engineering (AIRIE) application was a prototype application that displays images of a system-of-interest with information superimposed on top of or near the system’s parts. Program and project managers, engineers, safety and mission assurance personnel, and other stakeholders have access to information that is of high interest, up-to-date, and in an easy-to-see and interactive format.  The extensive development and anticipated use of Model-Based Systems Engineering (MBSE) within NASA would allow automated linkages of information from the System Model to the images.  Ultimately, the intention is to work towards a vision for Model-Based Project Management (MBPM).  The inspiration sources for AIRIE are heads-up cockpit displays, augmented reality, and traffic and weather overlays on maps or satellite images.