The GVIS Lab's visualizations allow people to interact with science and environments in an interactive and intuitive way.

The GVIS Lab continually works on a variety of data visualization and interactive technology projects ranging from data analysis to Martian surface simulations.

Explore some of the Lab’s visualizations below. 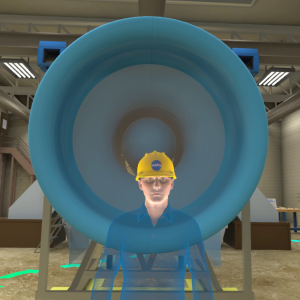 W-1A is NASA Glenn’s Low Speed Axial Compressor facility. This virtual reality experience allows the user to take an immersive and interactive tour of the facility as it is being used for recent work on jet engine casing treatments. Using a VR headset or the Cave Automated Virtual-Reality Environment (CAVE), the user can explore the facility’s environment, examine the engine and pick up objects to better inspect them in a seemingly realistic way.

A video featuring the W-1A visualization can be seen on our YouTube channel. 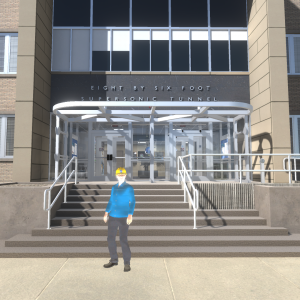 The Building 54 virtual tour provides users with a detailed look inside the lobby leading to Glenn’s 9- by 15-Foot Low-Speed Wind Tunnel and 8- by 6-foot Supersonic Wind Tunnel. A virtual tour guide offers information on the facility and research as the user explores the space. The application was developed for use on both virtual reality headsets and in non-VR via the web and provides a window into the work being done at Glenn without needing physical access to the facilities.

You can take the tour yourself by clicking here! 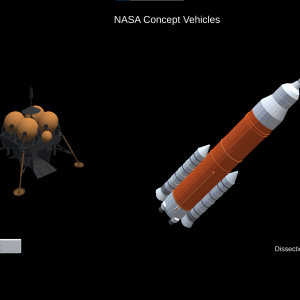 The NASA Concept Vehicles visualization allows users to manipulate, dissect, and learn about experimental vehicles at NASA, designed to be used with zSpace. ZSpace is a 3D augmented reality computer operating on Windows OS along with a stylus and glasses that extend typical three-dimensional viewing by allowing the user to pull content out of the screen.

This visualization consists of a central hub in which users can view all models together along with options to focus on only one vehicle. The parts of each vehicle are labelled (where information is available) so that when the users dissect the model, the app displays information on the specific part they are holding. 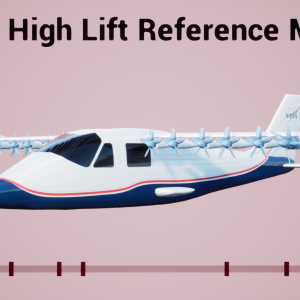 The X-57 visualization displays NASA’s concept electric aircraft, the X-57, using the Looking Glass. The Looking Glass is a 2 inch thick display which utilizes polarized glass to render a 3D model in a hologram-like manner, helping the user to see depth in a 3D visualization which might otherwise look 2-dimensional. The X-57 is powered by 12 high lift motors and 2 large motors, all of which are electric.

This visualization contains an animation of the X-57 flying as well as a separate animation a cross section of one of the high lift motors which shows the motor’s thermal loads during operation. Using the Looking Glass allows these visualizations to be viewed more in depth rather than just as a 2D animation. 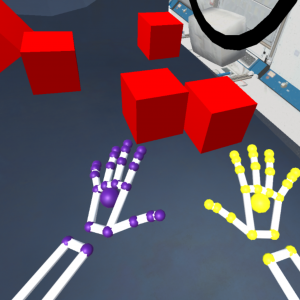 The International Space Station (ISS) visualization allows the user to virtually explore a model of the ISS. This is accomplished through a combination of technologies including Leap Motion, Xbox and virtual reality. With these technologies, the user is able to navigate the ISS environment as if they were in space. The visualization also includes a game in which the user interacts with and stacks 3D blocks inside the ISS’s Microgravity Science Glovebox (MSG). The Leap Motion infrared sensor on the front of the VR Oculus headset tracks the person’s hand down to the individual fingers allowing them to move and stack the 3D blocks without the aid of a controller.

This visualization was created by a GVIS Lab intern over a period of two internship sessions and is used to help demonstrate what is possible with experimental VR technology. 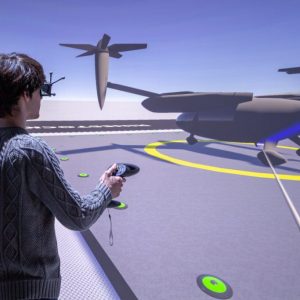 The Urban Air Mobility (UAM) task within the Unmanned Aircraft Systems in the National Airspace Command and Control Subproject attempts to identify the communications challenges associated with UAM operations. At NASA Glenn, the UAM team has developed a concept of operations for command and control of UAM, which the GVIS Lab has modeled as a 3D simulation that can be run in various VR environments.

The UAM visualization is currently run in the GRUVE Lab’s Cave Automatic Virtual-Reality Environment (CAVE)—a three-walled virtual reality space. Here, users wear stereo shutter glasses and walk around the CAVE to observe full-scale models of concept drones up close and watch them fly in a virtual airport. Viewing the UAM in this way helps researchers identify design challenges that are not easily determined by other methods. Additionally, this simulation in the CAVE can be viewed by individuals or large groups making it an accessible and immersive experience. 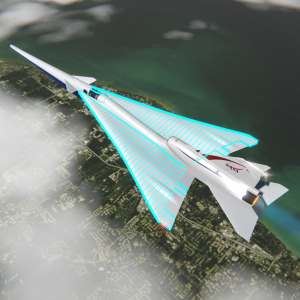 Can we develop a quieter supersonic aircraft? This is the question that NASA’s X-59 Quesst mission and the GVIS Lab’s Quesst visualization explore. Commercial planes aren’t allowed to fly faster than the speed of sound over land because they would create sonic booms which are very loud and disruptive to humans and animals. The X-59 is an experimental aircraft that could lead to future supersonic commercial travel over land, drastically cutting flight times and saving people time in the air.

This interactive virtual reality visualization drops the user into NASA Glenn’s 8×6 wind tunnel where they can explore the flight test model and data from a wind tunnel test. Next, they are teleported to 50,000 feet in the air to explore the design features of the aircraft as it cruises at Mach 1.4. Inside the cockpit, an audio demonstration compares the difference between a traditional sonic boom and Quesst’s quieter supersonic thump.

A non-virtual reality version of the visualization makes use of a commercial flight simulator chair and motion platform that engages users by providing them a sense of movement as they virtually explore the aircraft in flight.

This simulation gives NASA a portable and interactive tool to show researchers, partners, government officials, and the public the capabilities of Glenn’s facilities and the goals of the X-59 Quesst mission in an engaging and accessible way 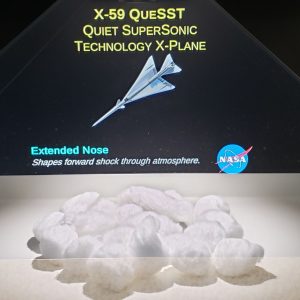 NASA has a large collection of 3D models of aircraft, space vehicles, satellites and more. The 3D model viewer created by the GVIS Lab uses a hologram display, Leap Motion, and touch screen technology to provide a simple interactive viewer to examine a wide variety of these 3D models. The user navigates through the list of models and chooses one to display. The Leap Motion sensor can then be used to move and spin the model to further examine it. 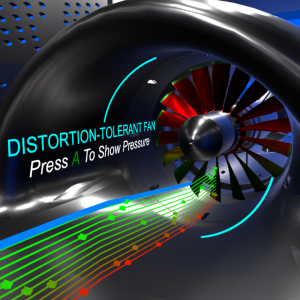 One of the ways to improve aircraft efficiency is to reduce the drag on the aircraft using the aircraft’s own engines. Engineers at Glenn are testing a new kind of propulsion system using a principle called Boundary Layer Ingestion (BLI). Analytical studies have shown that this new technology has the potential to reduce the aircraft fuel burn by as much as 8.5% compared to aircraft flown today. 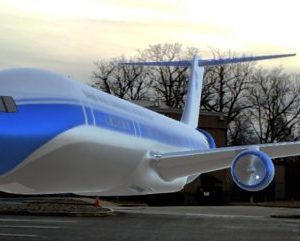 The HoloAero application is a HoloLens app that lets the user see three NASA concept aircraft in the context of their current environment. For example, the user can display an aircraft model in the room they are in making it appear as if the aircraft is floating in that room. The users can walk around the aircraft, scale it, spin it, and have it fly, all with voice commands. There are three models shown by the application: 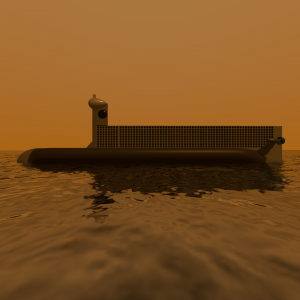 The Titan Submarine visualization is a virtual reality experience that allows users to explore a proposed mission concept vehicle as it floats on the surface of Kraken Mare, a methane ocean on one of Saturn’s moons, Titan. While on the surface, one can hear the Titan wind, recorded from the European Space Agency’s Huygens space probe (one of the few sound recordings taken from another planetary body). Users can then take the submarine under the surface of the ocean and navigate down to the sea floor.

The GVIS Lab created this application in partnership with Glenn’s Collaborative Modeling and Parametric Assessment of Space Systems (COMPASS) Lab to visualize what exploring Saturn’s oceans might entail. In the end, another concept was chosen to move forward, but the GVIS Lab still uses the application as an educational tool to discuss the capabilities of the lab and planetary exploration. 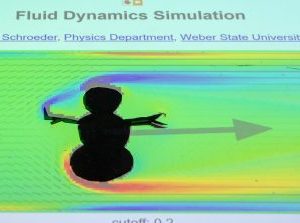 The Augmented Reality Fluid Flow Table lets users put physical objects onto a table and have a computer predict the flow past the object in real time. The colors represent the rotation of the flow with green being laminar flow from left to right, blue being clockwise rotation and red indicating counter-clockwise rotation. The arrow shows the force vector on the object due to the flow.

The table is mostly used for educational purposes and discovery of principles of fluid flow but similar technology has been used by researchers, engineers and doctors to explain everything from airfoils, vascular systems, wind tunnels and kayak oars.

Become an astronaut on the screen and swipe through the various spacesuits that are used depending on what the astronauts are doing. This interactive, augmented virtual reality experience puts the user into the virtual world on the Moon. You can also plant the U.S. Flag on the Moon while there. Especially unique to this one is that it was developed by a high school student who is currently interning with NASA’s Graphics and Visualization Lab (GVIS).

NASA’s Work on the Moon Animation

The “NASA’s work on the Moon” animation is a visualization designed to be played alongside the astronaut fitting room visualization. The animation joins an astronaut on the moon who tells the viewer about the upcoming Artemis mission, lunar dust, and golfing!