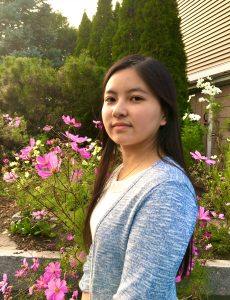 Michelle Ly is a first-year undergraduate student studying computer science at the University of Massachusetts Lowell. She is passionate about programming, education, art, and the intersection of tech and social good. In her free time, she enjoys organizing hackathons, going on road trips, creating digital art, and collecting laptop stickers.

As an intern at the NASA Glenn Research Center, she is excited to contribute to NASA’s Artificial Intelligence and Machine Learning (AIML) outreach, communications, and data science efforts. 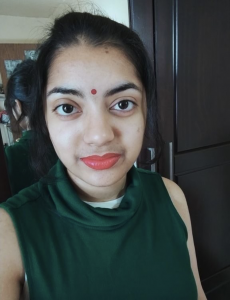 Currently, she is interning as an AI, Machine Learning and Data Science Communications and Outreach Intern on outreach support for the Scientific Computing Visualization Lab at NASA Glenn Research Center. As a NASA intern, she collaborates with another intern by contributing on a variety of web space projects including updating the Artificial Intelligence & Machine Learning at NASA (AIML) agency-wide website in SharePoint, implementing web design and outreach elements in the areas of scientific computing, AI/Machine Learning, data science and visualization. 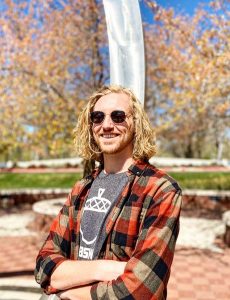 Caleb Cram is currently a senior studying games, interactive media and mobile technology at Boise State University. Born and raised in Boise, Idaho, Caleb has developed an intense passion for extended reality software development and the seemingly infinite possibilities there are to be explored within the technology as innovation and capabilities grow.

He spends the majority of his free time experimenting with cutting edge AR/VR software for the annual NASA SUITS Challenge. As an XR simulation development intern with NASA at GRC, Caleb is tasked with implementing VR functionality into a series of simulation projects and optimizing the EPFD project for utilization within the GRUVE lab, CAVE environment. 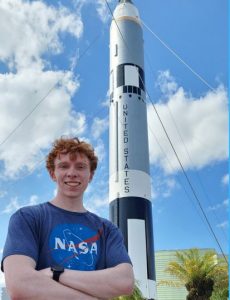 Patrick Demers is currently a junior at Iowa State University studying Software Engineering. Growing up in Sioux City, Iowa, Patrick has always been passionate about pushing the boundaries of technology. After being introduced to programming in 6th grade, he felt empowered by the control offered over the computer. Since then, Patrick has helped solve many problems for businesses by building websites and offering process automation solutions. 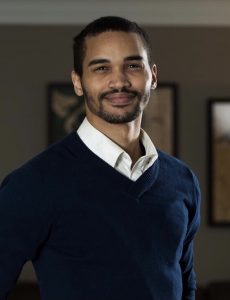 He is currently working with the Scientific Computing and Visualization team on the Periodic Table of Life (PeTaL) project, helping to develop Natural Language Processing (NLP) models where he will be gathering and processing the data to be used in training them. 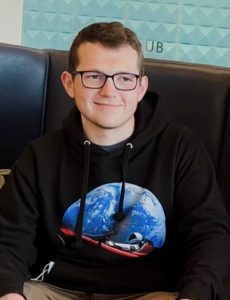 Jacob Pedersen is a junior at the University of Washington studying Computer Engineering and Mathematics. Coming from Seattle and being impacted by Boeing and big tech, aerospace has always been the sector he has been passionate about, with a deep interest in everything from commercial aviation to interplanetary rockets. As he works on his undergraduate degrees, he is also working on his own rocketry program with the goal of breaking the collegiate altitude record late next year.

As an electric aircraft propulsion intern at Glenn Research Center, Jacob is creating and integrating exiting models of SUSAN into simulation software for outreach and testing. 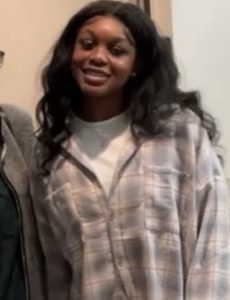 Dedelolia Olungwe is a senior majoring in Biomedical Engineering at Virginia Commonwealth University. Born and raised in Baltimore, Maryland, Dedelolia has a passion for data science. Her drive to succeed in data science and biomedical engineering continues as she witnesses how important the two are in collaboration. Data science is critical to the healthcare system and engineering overall — its efforts to mimic and decode the human brain and engineer a better healthcare system are crucial.

Dedelolia has worked with NASA twice prior, and her tasks entailed experimenting with artificial intelligence (AI) and developing automated and semi-automated mechanisms using Natural Language Processing (NLP) and machine learning. This spring at NASA, she is working on the Periodic Table of Life (PeTaL) project, which encompasses training deep neural networks, data mining, text classification, User Interface design and other machine learning techniques.

Four high school students from Hathaway Brown, a local K-12 school, work on projects in GVIS Lab as mandated by the Space Act Agreement of 2016. The unique collaboration between Glenn and Hathaway Brown provide high school students the opportunity to develop skills in critical thinking, communication and digital literacy, as well as provides one-on-one mentoring and hands-on exposure to advanced technology. 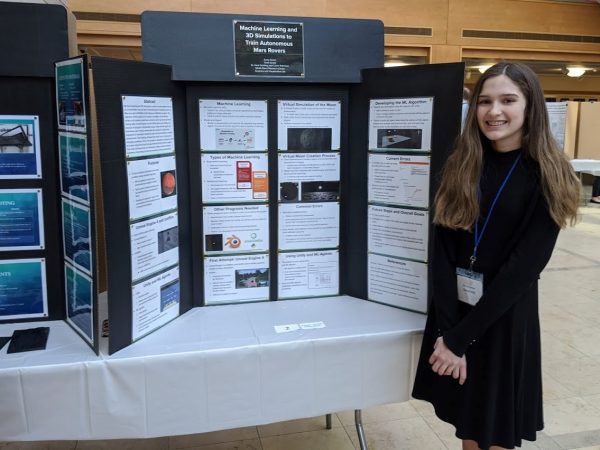 Avery Simon is an eleventh grader at Hathaway Brown School using machine learning and 3D simulations to create an autonomous Mars rover. She is currently utilizing the Unity game engine and is collaborating with researchers working on ISRU (In-Situ Resource Utilization). 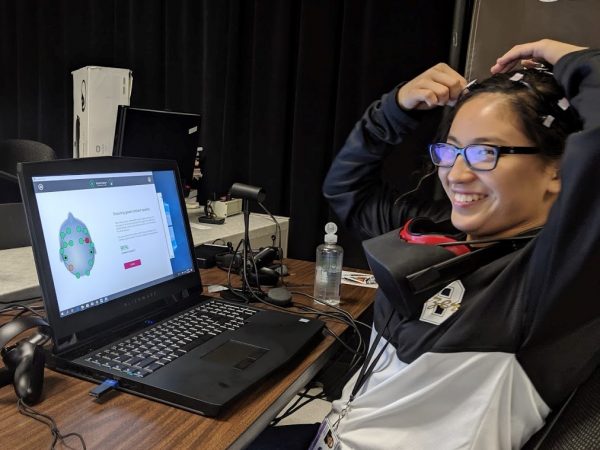 Kristina Martinez  is working on a new project to create a virtual reality simulation of NASA’s VIPER Lunar Rover project. This simulation will be used for the GVIS Lab’s outreach. Kristina’s past project consisted of creating a virtual reality (VR) app and using it along side an EEG (electroencephalogram) headset to control a virtual drone in VR, as pictured above. 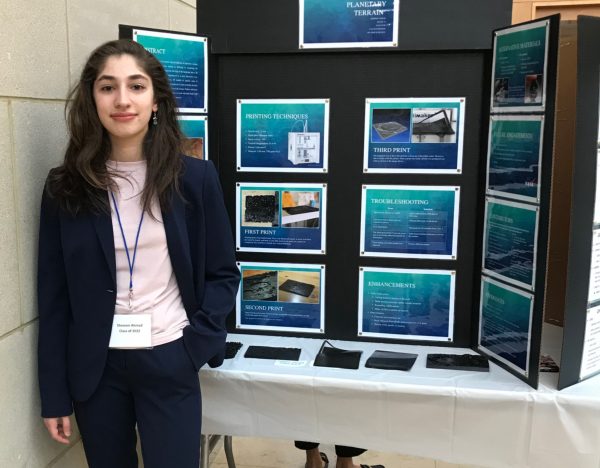 Shereen Ahmad is working on a project that focuses on making planetary terrain accessible to a wider audience by 3D printing areas of Martain terrain that can be used by people with vision impairments. The intention is to use the models for outreach work in collaboration with the Cleveland Sight Center and the Cleveland Museum of Natural History. 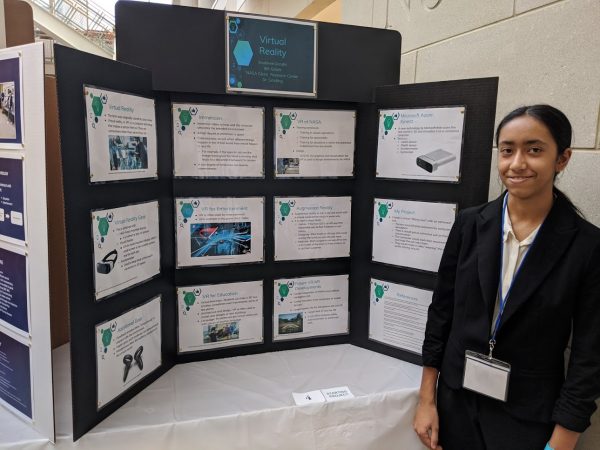 Shubhee Gandhi is currently working on making a virtual fitting room app that will allow users to try on astronaut suits. The app, which will use the Microsoft Azure Kinect DK to sense the location of the user and is being programmed using the Unity game engine, will be used by the Lab for tours and outreach events.

Click here to visit our archive of past interns!