The GRUVE Lab provides a fully interactive virtual reality space in which to observe and analyze data and environments.

Within the GVIS Lab lies the GRUVE (Glenn Reconfigurable User-interface and Virtual Reality Exploration) Lab. It is home to the CAVE, which is predominantly used to tour virtual environments of NASA facilities and for mission scenarios.

How the CAVE works

The Cave Automatic Virtual Environment (CAVE) allows multiple people to view a visualization in 3D together. These visualizations include 3D models of NASA facilities and intricate images created from collected data.

Powerful projectors and mirrors, in combination with an infrared motion tracking system and active-shutter glasses, allow viewers to view 3D models and data in perfect perspective. 3D models effectively pop off the screen and remain proportional no matter where the user with the pair of tracking glasses moves in the environment.
The CAVE can be driven by either a Windows or Linux computer system, enabling the team to use the best environment for a given problem and software tool. 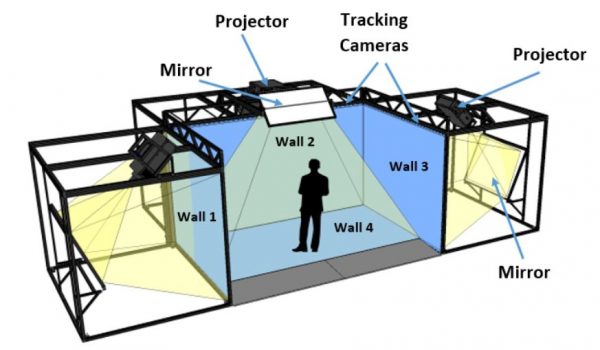 Benefits of the CAVE

The CAVE’s technology provides a unique advantage for researchers, scientists, engineers and others. The ability to see and analyze forces and data that would otherwise be un-viewable to the human eye allows the observer to understand their subject matter in more detail.

Benefits of the CAVE to research include:

The CAVE is available for use by all members of Glenn for their projects.

Software available in the GRUVE lab