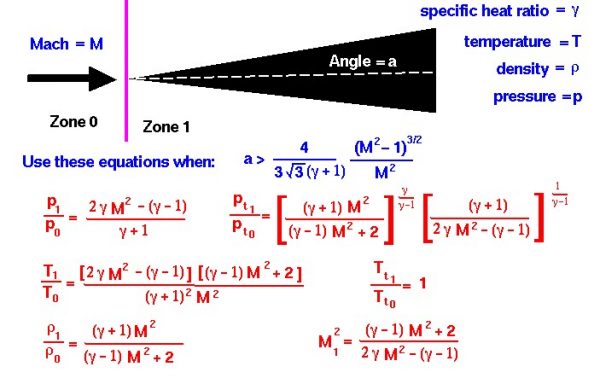 Speed of an Object

For compressible flows with little or small flow turning, the flow process is reversible and the entropy is constant. The change in flow properties are then given by the isentropic relations (isentropic means “constant entropy”). But when an object moves faster than the speed of sound, and there is an abrupt decrease in the flow area, the flow process is irreversible and the entropy increases. Shock waves are generated which are very small regions in the gas where the gas properties change by a large amount. Across a shock wave, the static pressure, temperature, and gas density increases almost instantaneously. The Mach number and speed of the flow decrease across a shock wave. If the upstream Mach number is in the low supersonic regime, the specific heat ratio of air remains a constant value (1.4) and air is said to be calorically perfect. But under low hypersonic flow conditions or high total temperature conditions, the specific heat ratio changes and air is then said to be calorically imperfect. Derived flow variables, like the speed of sound and the isentropic flow relations are slightly different for a calorically imperfect gas than the conditions predicted for a calorically perfect gas because some of the energy of the flow excites the vibrational modes of the diatomic molecules of nitrogen and oxygen in the air.

If the shock wave is perpendicular to the flow direction it is called a normal shock. On this web page, we have listed the equations which describe the change in flow variables for flow across a normal shock. There are two groups of equations and two slides; one for the calorically perfect gas, and the other for the calorically imperfect gas. The equations presented here were derived by considering the conservation of mass, momentum, and energy. for a compressible gas while ignoring viscous effects. The equations have been further specialized for a one-dimensional flow without heat addition.

The equations can be applied to the two dimensional flow past a wedge for the following combination of free stream Mach number M and wedge angle c :

where gam is the ratio of specific heats. If the wedge angle is less than this detachment angle, an attached oblique shock occurs and the equations are slightly modified.

Beginning with the calorically perfect gas, across the normal shock wave the Mach number decreases to a value specified as M1:

The total temperature Tt across the shock is constant,

The static temperature T increases in zone 1 to become:

The static pressure p increases to:

And the density r changes by:

The total pressure pt decreases according to:

The right hand side of all these equations depend only on the free stream Mach number. So knowing the Mach number, we can determine all the conditions associated with the normal shock. The equations describing normal shocks were published in a NACA report (NACA-1135) in 1951. 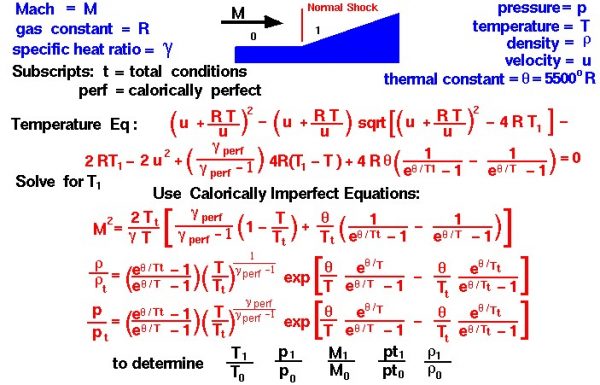 As with the calorically perfect case, the conservation of mass, momentum, and energy equations are solved simultaneously to determine the flow conditions across the normal shock. For the calorically imperfect case, additional terms are added to the energy equation to account for the vibration of the molecules at high temperatures. The resulting equation for the static temperature downstream of the shock is:

To change input values, click on the input box (black on white), backspace over the input value, type in your new value. Then hit the red COMPUTE button to send your new value to the program. You will see the output boxes (yellow on black) change value. You can use either Imperial or Metric units. Just click on the menu button and click on your selection. For the given altitude input, the program computes the upstream standard day conditions. The ratios are computed using the Mach number and specific heat ratio inputs and the equations given in the figure. The downstream conditions are computed from the upstream conditions and the ratios. If you are an experienced user of this simulator, you can use a sleek version of the program which loads faster on your computer and does not include these instructions.

There is more complete shock simulation program that is also available at this web site. The ShockModeler program models the intersection and reflection of multiple shock waves.