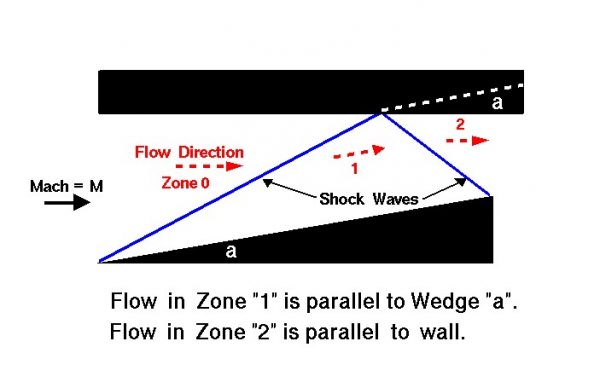 When an object moves faster than the speed of sound, and there is an abrupt decrease in the flow area, shock waves are generated. Shock waves are very thin regions in the gas where the gas properties change by a large amount. In many flow problems multiple shocks are present. The shocks may intersect with each other and with the surfaces generating them. On this page we present the physics which govern the reflection of a shock wave from a solid wall and include a Java program that you can use to investigate this flow problem.

A supersonic flow at Mach number M is flowing from left to right. We will call the free stream region zone “0” as shown in red. The flow encounters a wedge “a” and generates a shock wave with the conditions downstream of this shock noted as zone “1”. The flow in zone “1” is parallel to wedge “a” and the conditions are specified by the oblique shock relations given on another page. The shock wave then strikes a solid wall and reflects from the wall generating a new shock. The flow downstream of the reflected shock is denoted as zone “2”. Since the flow in zone “1” is parallel to wedge “a”, it strikes the solid wall at angle “a” as shown by the white dashed line. The flow in zone “2” is parallel to the solid wall and the conditions in zone “2” are given by the oblique shock relations with the upstream conditions being the conditions in zone “1”. The reflected shock will itself reflect from the wedge producing a “train” of shock waves in the duct formed by the wedge and the solid wall. Across each shock and refection the Mach number of the flow is decreased. Eventually, the Mach number in some zone becomes too low to support an oblique shock and a terminal, normal shock is formed.

Here’s a Java program which solves the reflected shock problem.

To study the reflected shock problem, push the “Opposed” button on the blue bar at the top. Input to the program is made using the sliders, or input boxes at the lower left. To change the value of an input variable, simply move the slider. Or click on the input box, select and replace the old value, and hit Enter to send the new value to the program. For the reflected shock problem, set “Angle 2” to zero by moving the slider fully to the left. Output from the program is displayed in output boxes at the lower right. The user selects the Zone to display by using the choice button. The flow variables are presented as ratios to the previous zone (up) and to the free stream value (0). The graphic at the top shows the wedges in red and green and the shock wave generated by the wedge as a line. The line is colored blue for an oblique shock and magenta when the shock is a normal shock. The user can move the display by clicking on the graphic, holding down, and dragging the graphic. You can zoom in or out of the graphic by using the slider at the top. If you loose the graphic, click on “Find” to restore the initial display.

The ShockModeler simulation program, shown above, can also be used to study the intersection of multiple shock waves and the development of expansion fans. A User’s Manual of the program is available at this web site. If you are an experienced user of this simulator, you can use a sleek version of the program which loads faster on your computer and does not include these instructions.