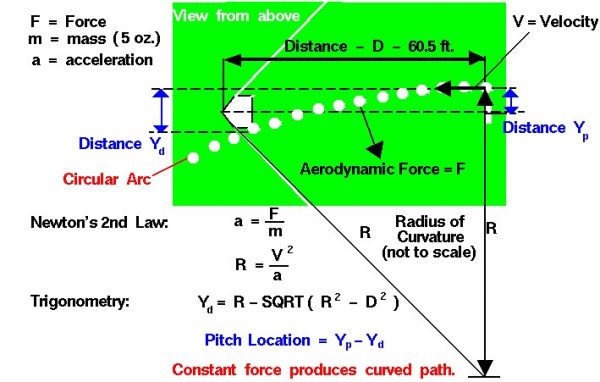 All that is necessary to create lift is to turn a flow of air. The airfoil of a wing turns a flow, but so does a spinning baseball. The details of how the force is generated are fairly complex, but the magnitude of the force F depends on the radius of the ball b, the spin of the ball s, the velocity V of the pitch, the density r of the air, and an experimentally determined lift coefficient Cl.

where pi is the number 3.14159 .. the ratio of the circumference to the diameter of a circle.

As the force acts on the ball, it is deflected along its flight path. If we neglect the viscous forces on the ball, which slow it down and change the magnitude and direction of the force, we have a constant force always acting perpendicular (at a right angle) to the flow direction. The resulting flight path is a circular arc. On the figure, we see the trajectory of the baseball as it moves from the pitching mound to the plate from right to left. Each white dot is the location of the ball at .05 second intervals. It gets to the plate pretty fast! The radius of curvature R of the flight path depends on the velocity V of the pitch and the acceleration a produced by the side force.

We can determine this acceleration from Newton’s second law of motion using the force for a spinning ball and the mass (m) of the baseball (5 oz.).

Since the radius of curvature depends on the force, all the factors that affect the force will also affect the trajectory. Collecting all the information into one equation:

Knowing the radius of curvature and the distance from the pitching mound to home plate, we can also calculate the distance that the ball is deflected (Yd) along the flight path.

Now let’s do a little algebra: