Sir Isaac Newton’s laws of motion explain the relationship between a physical object and the forces acting upon it. Understanding this information provides us with the basis of modern physics.

What are Newton’s Laws of Motion?

Sir Isaac Newton worked in many areas of mathematics and physics. He developed the theories of gravitation in 1666 when he was only 23 years old. In 1686, he presented his three laws of motion in the “Principia Mathematica Philosophiae Naturalis.”

By developing his three laws of motion, Newton revolutionized science. Newton’s laws together with Kepler’s Laws explained why planets move in elliptical orbits rather than in circles.

Below is a short movie featuring Orville and Wilbur Wright and a discussion about how Newton’s Laws of Motion applied to the flight of their aircraft.

An object at rest remains at rest, and an object in motion remains in motion at constant speed and in a straight line unless acted on by an unbalanced force.

The acceleration of an object depends on the mass of the object and the amount of force applied.

His second law defines a force to be equal to change in momentum (mass times velocity) per change in time. Momentum is defined to be the mass m of an object times its velocity V. 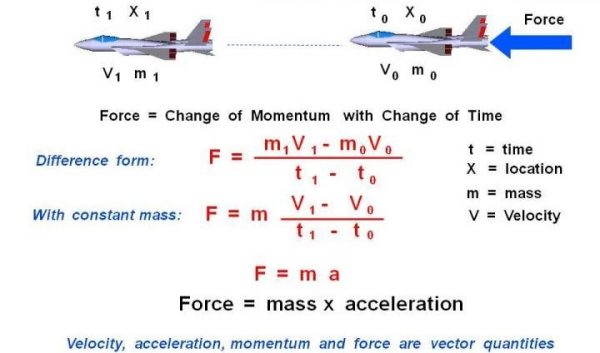 Let us assume that we have an airplane at a point “0” defined by its location X0 and time t0. The airplane has a mass m0 and travels at velocity V0. An external force F to the airplane shown above moves it to point “1”. The airplane’s new location is X1 and time t1.

Newton’s second law talks about changes in momentum (m * V). So at this point, we can’t separate out how much the mass changed and how much the velocity changed. We only know how much product (m * V) changed.

Let us assume that the mass stays at a constant value equal to m. This assumption is rather good for an airplane because the only change in mass would be for the fuel burned between point “1” and point “0”. The weight of the fuel is probably small relative to the weight of the rest of the airplane, especially if we only look at small changes in time. If we were discussing the flight of a baseball,  then certainly the mass remains a constant. But if we were discussing the flight of a bottle rocket, then the mass does not remain a constant and we can only look at changes in momentum. For a constant mass m, Newton’s second law looks like:

The change in velocity divided by the change in time is the definition of the acceleration a. The second law then reduces to the more familiar product of a mass and an acceleration:

Remember that this relation is only good for objects that have a constant mass. This equation tells us that an object subjected to an external force will accelerate and that the amount of the acceleration is proportional to the size of the force. The amount of acceleration is also inversely proportional to the mass of the object; for equal forces, a heavier object will experience less acceleration than a lighter object. Considering the momentum equation, a force causes a change in velocity; and likewise, a change in velocity generates a force. The equation works both ways.

The velocity, force, acceleration, and momentum have both a magnitude and a direction associated with them. Scientists and mathematicians call this a vector quantity. The equations shown here are actually vector equations and can be applied in each of the component directions. We have only looked at one direction, and, in general, an object moves in all three directions (up-down, left-right, forward-back).