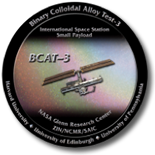 The Binary Colloidal Alloy Test-3 (BCAT-3) hardware supported three investigations in which ISS crews photographed samples of colloidal particles (tiny nanoscale spheres suspended in liquid) to document liquid/gas phase changes, growth of binary crystals, and the formation of colloidal crystals confined to a surface. Colloids are small enough that in a microgravity environment without sedimentation and convection, they behave much as atoms and so can be used to model all sorts of phenomena because their size, shape, and interactions can be controlled.

The BCAT-3 payload consists of ten small samples of colloid alloys in which the microscopic colloid particles are mixed together into a liquid. These ten samples are contained within a small case that is the size of a school textbook. At the start of an experiment run, all ten samples are shaken to completely remix the colloid samples, much in the same way that salad dressing must be shaken to remix oil and vinegar. After the samples are mixed, what remains is periodically photographed using a digital camera until the colloid and liquid components of those samples have separated or the polymers have formed crystals. The samples can be remixed to repeat the experiment.

The ten samples in BCAT-3 were selected as part of three separate experiments examining different physical processes: critical point, binary alloys, and surface crystallization. Sample 7 makes up the BCAT-3-BA part of the experiment and it is a binary alloy.

Colloids are also technologically interesting because they are the right size to manipulate light. Natural opal is likely the oldest and best known of the “photonic” crystals that direct light. Shine white light on the opal and a rainbow appears, demonstrating how colors of light are split up and sent in different directions. The ability to better control the movement of light is a major technological goal, not only to build computers operating on light instead of electricity but also to harness the full capabilities of existing fiber-optic networks for improving communications. Crystal structures built from only one building block, e.g., the arrangement of colloidal silica spheres in an opal, are well understood, but their optical properties are limited. More useful photonic crystals can be built from two different types of building blocks mixed together, yielding a binary alloy. The resulting structures and their optical properties are vast, as both the size and the proportion of the two building blocks can be varied. How crystallization is affected by these changes is only beginning to be explored. Theoretical studies suggest that desired optical properties require more complicated crystal structures, but this has not been well explored experimentally. Microgravity is crucial to the binary crystal experiments, allowing the growth of crystals far larger than those created on the surface of Earth. The BCAT-3 binary alloy sample furthers previous investigations on binary growth in space.