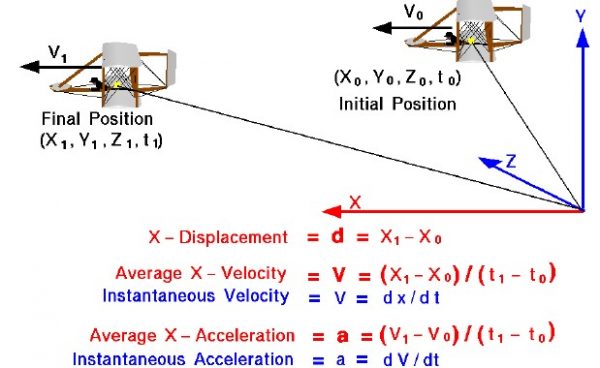 We live in world that is defined by three spatial dimensions and one time dimension. Objects can move within this domain in two ways. An object can translate, or change location, from one point to another. And an object can rotate, or change its attitude. In general, the motion of an aircraft involves both translation and rotation. This makes the analysis of aircraft motion much more complex than ordinary objects.

The average velocity (V) of the aircraft through the domain is the displacement divided by the time difference. In the X – direction, the average velocity is (x1 – x0) / (t1 – t0). This is only an average velocity; the aircraft could speed up and slow down inside the domain. At any instant, the aircraft could have a velocity that is different than the average. If we shrink the time difference down to a very small (differential) size, we can define the instantaneous velocity to be the differential change in position divided by the differential change in time (V = dx / dt) from calculus. So when we initially specified the location of our aircraft with (x0, y0, z0, and t0) coordinates, we could also specify an initial V0 instantaneous velocity. Likewise at the final position (x1, y1, z1, and t1), the velocity could change to some V1. (We are here considering only the x-component of the velocity. In reality, the aircraft velocity can change in all three directions. Velocity is a vector quantity; it has both a magnitude and a direction associated with it.)