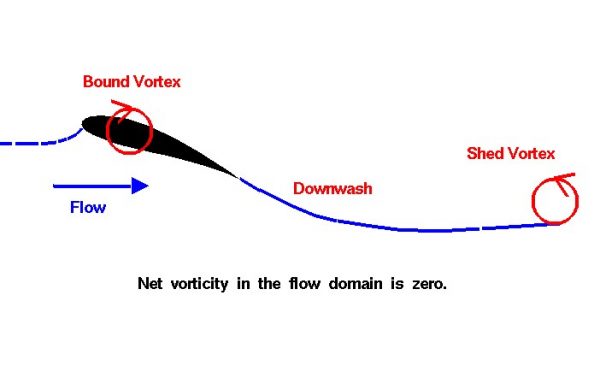 Lift is the force which holds an aircraft in the air. From a Newtonian perspective, lift is generated by turning a flow of air. The flow turning creates a downwash from the wing which can be observed in flight.

The flow turning that occurs in the creation of lift also creates bound vorticity within the airfoil. For a general shaped airfoil, there is some distribution of vorticity which we can think of as small vortices. For the simple Joukowski airfoil, shown in this figure, there is a single vortex present at the center of the generating cylinder. The flowfield from this generating cylinder has been conformally mapped into the airfoil, but the vorticity has been maintained.

The existence of the bound vortex (or vortices) within the airfoil created an important theoretical problem when it was first proposed. A static fluid has no vorticity within it; vorticity is zero in a static fluid. From the fluid conservation laws, if a fluid initially has no vorticity within it, then the net vorticity must remain zero within the domain. With a bound vortex within the object, there would then have to be another vortex of opposite strength present within the flow domain. Then the sum of the two vortices, one spinning clockwise, the other counter clockwise, would be zero as required by the conservation laws. Where is the other vortex?

It took some very careful experimental work by Ludwig Prandtl to actually “catch” the other vortex on film. In his experiment he placed an airfoil in a tunnel with no flow. He turned the tunnel on and as the flow began he photographed the flow field at the trailing edge of the airfoil. What he saw was a vortex shed from the trailing edge, spinning opposite to the predicted bound vortex in the airfoil. The shed vortex was convected downstream and eventually mixed out due to viscous effects in the air stream. Without viscosity, the shed vortex would remain with constant strength and would be carried downstream away from the airfoil. This is depicted by the vortex at the right of the figure.