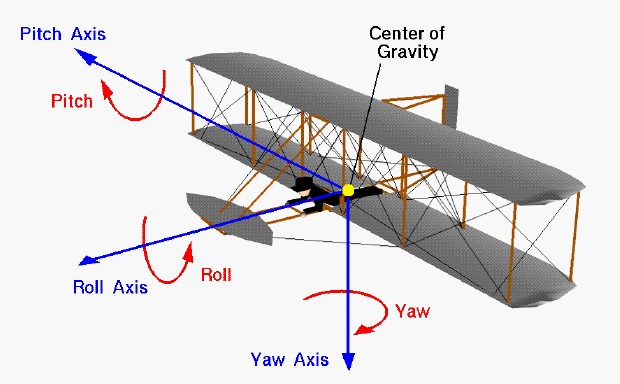 One of the major breakthroughs of the Wright brothers was the ability to control and maneuver their aircraft. Since we live in a three dimensional world, it is necessary to control the attitude, or orientation, of a flying aircraft in all three dimensions. The first aircraft to achieve complete active control was the 1902 glider which is shown on this slide. In flight, any aircraft will rotate about its center of gravity, a point which is the average location of the mass of the aircraft. We can define a three dimensional coordinate system through the center of gravity with each axis of this coordinate system perpendicular to the other two axes. We can then define the orientation of the aircraft by the amount of rotation of the parts of the aircraft along these principal axes.

During the flights of 1900 the Wrights tested a method called wing warping to achieve roll control. Through a series of cables, the Wrights could twist the wing tips up or down relative to the rest of the wing. This produced an unbalanced force on the wing which caused the aircraft to roll. Modern airliners and fighter planes, however, no longer use wing warping for roll control. They typically use either ailerons or spoilers which are moving sections on the wing of the aircraft. When you travel on an airliner, watch the wings during turns. The pilot rolls the aircraft in the direction of the turn. You will probably be surprised at how little deflection is necessary to bank (roll) a large airliner. You can tell whether an airliner is using spoilers or ailerons by noticing where the moving part is located. At the trailing edge, it’s an aileron; between the leading and trailing edges, it’s a spoiler.

A Movable Rudder for Yaw Control

The movable rudder was added to the 1902 aircraft to provide yaw control. They found it necessary to keep the nose pointed in the direction of a turn to avoid adverse yaw which they first encountered with the tailless 1901 glider. The Wright’s used flat plate airfoils for their rudders and deflected the entire surface from side to side. On modern aircraft, the rudder is a separate piece attached to the vertical stabilizer. The combination creates a symmetric airfoil and produces no lift when the rudder is aligned with the stabilizer. Forces to the left or right then depend on the deflection of the rudder. Modern fighter planes sometimes have two vertical stabilizers and rudders because of the need to control the plane with multiple, very powerful engines.