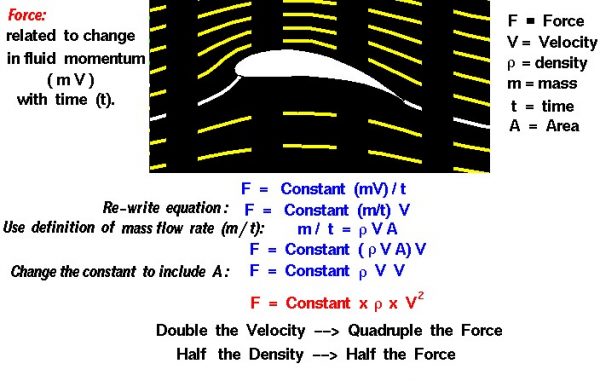 Lift is created by deflecting a flow of air, and drag is generated on a body in a wide variety of ways. From Newton’s second law of motion, the aerodynamic force F on the body is directly related to the change in momentum of the fluid with time t. The fluid momentum is equal to the mass m times the velocity V of the fluid.

Since the air moves, defining the mass is tricky. If the mass of fluid were brought to a halt, it would occupy some volume in space. We can define the density (r) of the fluid to be the mass divided by the volume v.

Combining the velocity dependence and absorbing the area into the constant, we find:

Effect of Velocity on Aerodynamic Forces

The aerodynamic force depends linearly on the density of the air. Halving the density halves the force. As altitude increases, the air density decreases. This explains why airplanes have a flight ceiling, an altitude above which it cannot fly. As an airplane ascends, a point is reached where there is not enough air mass to generate enough lift to overcome the airplane’s weight. The relation between altitude and density is a fairly complex exponential.

You can investigate the effect of momentum on lift by using the Student Airfoil Interactive Simulation. Set a small angle of attack using the slider, then vary the “Speed” and “Altitude.” Try doubling the speed and notice the effect on lift. Change the altitude until the air density is half of its previous value. What happened to the lift? You can use the browser “Back” button to return to this page.