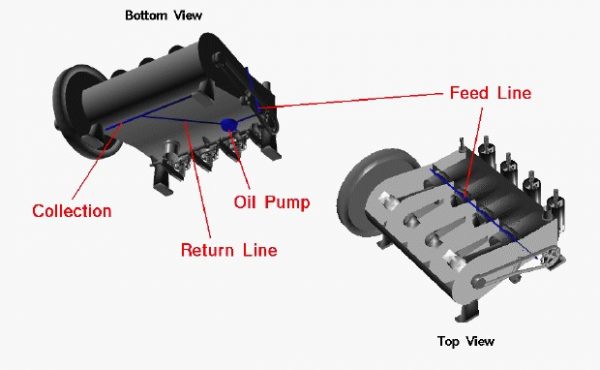 This is a computer drawing of the lubrication system of the Wright brothers’ 1903 aircraft engine. This engine powered the first, heavier than air, self-propelled, maneuverable, piloted aircraft; the Wright 1903 Flyer at Kitty Hawk, North Carolina, in December, 1903. To generate thrust for their aircraft, the brothers used twin, counter-rotating propellers at the rear of the aircraft. To turn the propellers, the brothers designed and built a water-cooled, gasoline powered, four-stroke, four cylinder, internal combustion engine.

The figure at the top shows the major components of the lubrication system on the Wright 1903 engine. In any internal combustion engine, fuel and oxygen are combined in a combustion process to produce the power to turn the crankshaft of the engine. The combustion generates high pressure exhaust gas which exerts a force on the face of a piston. The piston moves inside a cylinder and is connected to the crankshaft by a rod which transmits the power. There are many moving parts is this power train as shown in this computer animation:

The job of the lubrication system is to distribute oil to the moving parts to reduce friction between surfaces which rub against each other.

The lubrication system used by the Wright brothers is quite simple. An oil pump is located on the bottom of the engine, at the left of the figure. The pump is driven by a worm gear off the main exhaust valve cam shaft. The oil is pumped to the top of the engine, at the right, inside a feed line. Small holes in the feed line allow the oil to drip inside the crankcase. In the figure, we have removed the fuel system and peeled back the covering of the crankcase to see inside. The oil drips onto the pistons as they move in the cylinders, lubricating the surface between the piston and cylinder. The oil then runs down inside the crankcase to the main bearings holding the crankshaft. Oil is picked up and splashed onto the bearings to lubricate these surfaces. Along the outside of the bottom of the crankcase is a collection tube which gathers up the used oil and returns it to the oil pump to be circulated again. Notice that the brothers did not lubricate the valves and rocker assembly for the combustion chambers.