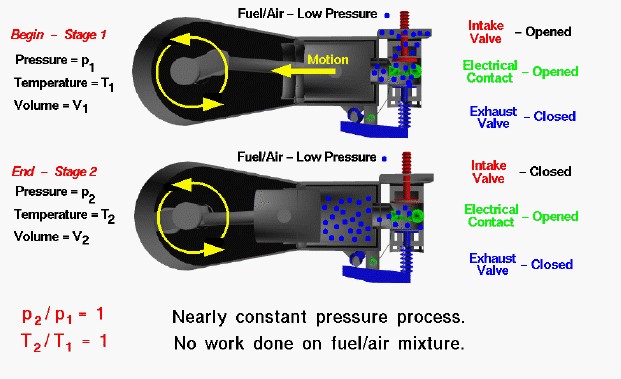 The engine cycle begins at Stage 1 with the intake stroke as the piston is pulled towards the crankshaft (to the left in the figure). The intake valve is open, and fuel and air are drawn past the valve and into the combustion chamber and cylinder from the intake manifold located on top of the combustion chamber. The exhaust valve is closed and the electrical contact switch is open. The fuel/air mixture is at a relatively low pressure (near atmospheric) and is colored blue in the figure above. At the end of the intake stroke, Stage 2 the piston is located at the far left and begins to move back towards the right. The cylinder and combustion chamber are full of the low pressure fuel/air mixture and as the piston begins to move to the right, the intake valve closes to begin the compression stroke.

The intake stroke takes place at a nearly constant atmospheric pressure because the inlet valve is open to the intake manifold throughout the stroke. There is (theoretically) no work done on the fuel air mixture during this process. The random motion of the gas fills the increasing volume as the piston moves to the left. The pressure and temperature ratios are both 1.0 during the intake stroke.