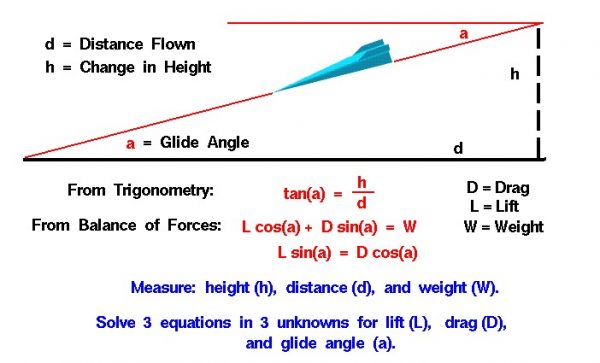 A glider is a special kind of aircraft that has no engine. Paper airplanes are the most obvious example, but gliders come in a wide range of sizes. Toy gliders, made of balsa wood or Styrofoam, are an excellent way for students to study the basics of aerodynamics. Hang-gliders are piloted aircraft that are launched by leaping off the side of a hill. The Wright brothers perfected the design of the first airplane and gained piloting experience through a series of glider flights from 1900 to 1903.More sophisticated gliders are launched by ground based catapults, or are towed aloft by a powered aircraft then cut free to glide for hours over many miles.

Lift and Drag of a Glider

With these three equations we can experimentally determine the lift and drag of a glider. If we test fly the glider and measure the distance along the ground, the height at which the glider is released, we can use the first equation to give us an average value of the glide angle. With the glide angle known and a measurement of the weight, we have two remaining equations in two unknowns which can be solved for the lift and the drag.