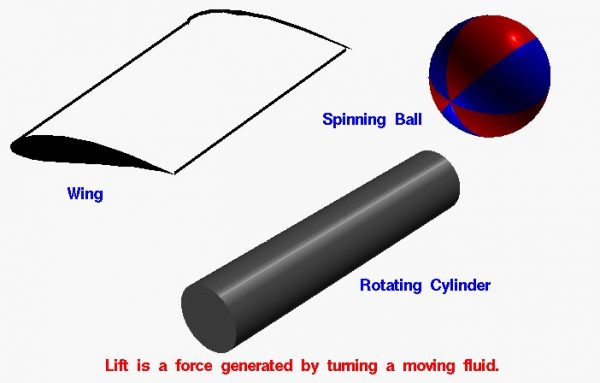 Lift is a force generated by turning a flow. Many different objects can generate a lift force and there many factors which influence the generation of lift. The left window shows a flow of air going by an object. You can select the shape of the object by using the menu button below the window. Just click on the menu button and select from the drop-menu. You can rotate the object by using the slider below the view window or by backspacing over the input box, typing in your new value and hitting the Enter key on the keyboard. On the right is a meter which measures the lift and displays it in scientific notation. You can display either the lift value (in English or Metric units) or the lift coefficient by using the choice buttons surrounding the output box.

The physical details of each of these examples are discussed on separate slides for the airplane wing, rotating cylinder, and spinning ball. In each case, the fluid passing the object is turned. And the reaction of the object is the generation of a force perpendicular to the initial flow direction. This force is called lift.

In the program at the top of this page, the velocity is constant (100 mph) and the air density is also constant and equal to the sea level, standard day value. For all the shapes except the ball, the area of the wing is the same. For the ball, the area is a smaller circular cross section. Using the program, which shape gives the greatest lift? How does lift change with increasing angle?