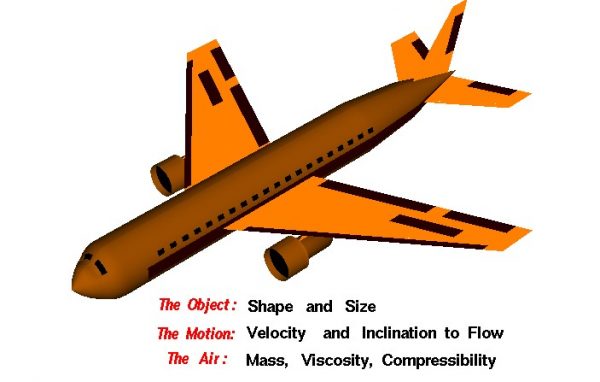 Geometry has a large effect on the amount of drag generated by an object. As with lift, the drag depends linearly on the size of the object moving through the air. The cross-sectional shape of an object determines the form drag created by the pressure variation around the object. The three dimensional planform shape affects the induced drag of a lifting wing. If we think of drag as aerodynamic friction, the amount of drag depends on the surface roughness of the object; a smooth, waxed surface produces less drag than a roughened surface. This effect is called skin friction and is usually included in the measured drag coefficient of the object.

Motion of the Air

Properties of the Air

Drag depends directly on the mass of the flow going past the aircraft. The drag also depends in a complex way on two other properties of the air: its viscosity and its compressibility. These factors affect the wave drag and skin friction which are described above.

We can gather all of this information on the factors that affect drag into a single mathematical equation called the Drag Equation. With the drag equation we can predict how much drag force is generated by a given body moving at a given speed through a given fluid.