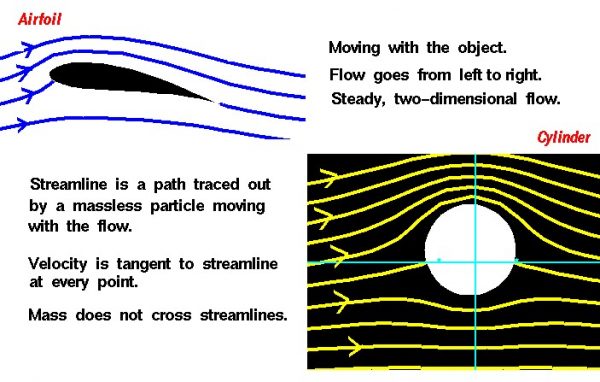 An important concept in the study of aerodynamics concerns the idea of streamlines. A streamline is a path traced out by a massless particle as it moves with the flow. It is easiest to visualize a streamline if we move along with the body (as opposed to moving with the flow). The figure above shows the computed streamlines around an airfoil and around a cylinder. In both cases, we move with the object and the flow proceeds from left to right. Since the streamline is traced out by a moving particle, at every point along the path the velocity is tangent to the path. Since there is no normal component of the velocity along the path, mass cannot cross a streamline. The mass contained between any two streamlines remains the same throughout the flow field. We can use Bernoulli’s equation to relate the pressure and velocity along the streamline. Since no mass passes through the surface of the airfoil (or cylinder), the surface of the object is a streamline.

Airplanes fly by moving through almost still air, yet we design and test them using wind tunnels, where the airplane model is fixed and the air is made to move past the model. This idea of keeping the airfoil fixed and having the air stream past the airfoil can be a bit confusing. Yet you experience the same kind of thing every day! When you stand on the corner and watch a car go by, the air around you is relatively still. As the car moves through the air there are aerodynamic forces present. Now if you were in the car and put your hand out the window, you could feel the aerodynamic force pushing on your hand. It feels like the air is moving past your hand as fast as the car is moving. The forces on the car are the same, whether you are standing on the corner or riding in the car. Well this same thing is true of airplanes. Whether the airplane moves through the air, or the air is pushed past the airplane, the forces are exactly the same. It’s usually easier, less expensive, and (in some cases) less dangerous to test airplanes in a wind tunnel before trying to fly them.