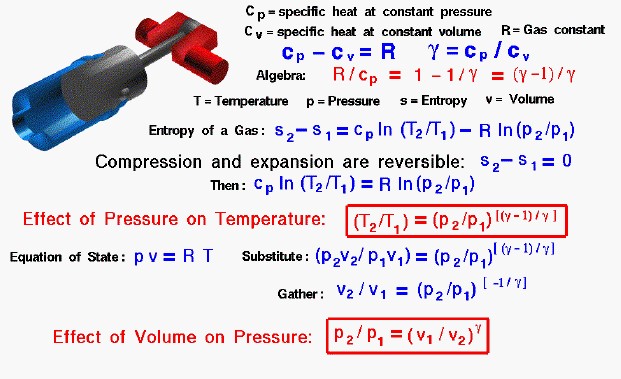 Thermodynamics is a branch of physics which deals with the energy and work of a system. Thermodynamics deals only with the large scale response of a system which we can observe and measure in experiments. Like the Wright brothers, we are most interested in thermodynamics for the role it plays in engine design.

On this page we derive two important equations which relate the pressure and temperature of a gas to the volume which the gas occupies during the compression and power strokes of an internal combustion engine.

At the upper left of the figure we show a computer drawing of a single cylinder of the Wright 1903 engine. The motion of the gray piston inside the blue cylinder turns the red section of the crankshaft which turns the propellers to generate thrust. As the piston moves in the cylinder, the volume of the fuel/air gas mixture inside the cylinder is changed. This change in volume results in a change in pressure and temperature of the gas which determines how much work the piston can deliver.

During the motion of the piston, we are going to assume that no heat is transferred into the cylinder. We are further going to neglect any friction between the piston and cylinder and assume that there are no energy losses of any kind. (In reality there are small losses and we account for the losses by an “efficiency factor” applied to the result we obtain assuming no losses.)

If we divide the first equation by cp, and use the definition of “gamma” we obtain:

Now we use the equation we have derived for the entropy of a gas:

where the numbers 1 and 2 denote the states at the beginning and end of the compression process, s is the entropy, T is the temperature, p is the pressure, and “ln” denotes the natural logarithm function. Since there is no heat transferred into the cylinder and no other losses, the change in entropy is zero and the process is reversible. Then the equation becomes:

We divide both sides by “cp” and take the exponential function of both sides (this “un-does” the logarithms).

where the symbol “^” denotes an exponent. Now we substitute the expression for “R / cp” to obtain:

where v is the specific volume occupied by the gas. If we substitute this expression for T into the temperature equation, we obtain: