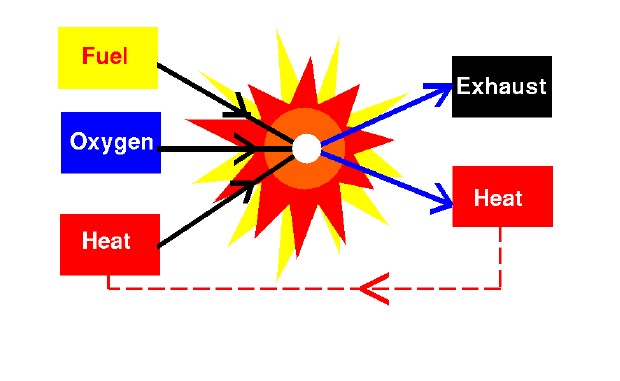 To move any airplane through the air, we must use a propulsion system to generate thrust. Different types of aircraft use different types of propulsion devices, but all aircraft rely on some type of engine to generate the power needed to run the propulsion system. The internal combustion, or piston engine, used by the Wright brothers and the modern jet and rocket engine all depend on the burning of fuel to produce power. Burning a fuel is called combustion, a chemical process that we study in middle or high school.

During combustion, new chemical substances are created from the fuel and the oxidizer. These substances are called exhaust. Most of the exhaust comes from chemical combinations of the fuel and oxygen. When a hydrogen-carbon-based fuel (like gasoline) burns, the exhaust includes water (hydrogen + oxygen) and carbon dioxide (carbon + oxygen). But the exhaust can also contain chemical combinations of other elements present during combustion. If gasoline is burned in air, which contains 21% oxygen and 78% nitrogen, the exhaust can also include nitrous oxides (NOX, nitrogen + oxygen). The exhaust is usually in the form of a gas because of the high temperature from the heat released. But some liquid and even solid exhaust can be formed. (Example: Soot is a form of solid exhaust that occurs in some combustion processes.)

During the combustion process, as the fuel and oxidizer are turned into exhaust products, heat is generated. Interestingly, some source of heat is also necessary to start combustion. (Gasoline and air are both present in your automobile fuel tank; but combustion does not occur because there is no source of heat.) Since heat is both required to start combustion and is itself a product of combustion, we can see why combustion takes place very rapidly. Also, once combustion gets started, we don’t have to continually provide a heat source. The heat of combustion will keep things going. (Example: We don’t have to keep lighting a campfire once it is burning.)