This is a computer drawing of the fuel system of the Wright brothers’ 1903 aircraft engine. This engine powered the first, heavier than air, self-propelled, maneuverable, piloted aircraft; the Wright 1903 Flyer at Kitty Hawk, North Carolina, in December, 1903. To generate thrust for their aircraft, the brothers used twin, counter-rotating propellers at the rear of the aircraft. To turn the propellers, the brothers designed and built a water-cooled, gasoline powered, four-stroke, four cylinder, internal combustion engine.

In any internal combustion engine, fuel and oxygen are combined in a combustion process to produce the power to turn the crankshaft of the engine. The job of the fuel system is to mix the fuel and air (oxygen) in just the right proportions for combustion and to distribute the fuel/air mixture to the combustion chambers. The fuel system of the Wright brothers is composed of three main components; a fuel tank and line mounted on the airframe, a carburetor in which the fuel and air are mixed, and an intake manifold which distributes the fuel/air mixture to the combustion chambers.

In the figure, the fuel tank and line are colored blue. The tank is mounted high because the brothers used gravity to feed the fuel into the engine. Fuel flows through a small metal fuel line from the tank to the engine. The flow of fuel to the engine is controlled by a fuel valve located on the fuel line. On the Wright 1903 aircraft, the fuel flow to the engine was adjusted while the aircraft was sitting on the launch rail. When the engine was running as fast and smooth as possible the aircraft was ready for launch. The pilot had a control stick which was connected to a cut-off valve to stop the engine at the end of the flight. But the brothers had no throttle or engine control during the 1903 flights.

Historical note – The modern automobile uses a fuel pump to move the fuel from the gas tank to the motor. The brothers’ 1903 engine had no fuel pump but they added a fuel pump to later engines. 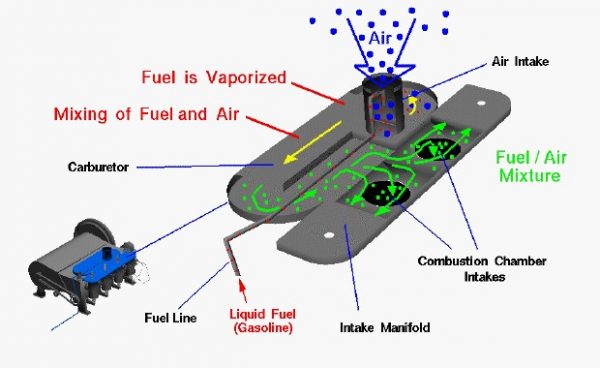 Historical note – The carburetor used by the Wrights is merely a pan in which to mix fuel and air. Modern automobiles use computer-controlled fuel injectors to accomplish the same function. Before fuel injectors were used, automobiles (and aircraft engines) used much more sophisticated carburetors to spray the fuel, mix it with the air, and vary the fuel/air ratio for optimized performance over a range of operating conditions. Modern carburetors have many, small, moving parts; the Wright carburetor has no moving parts. With modern carburetors and fuel injection systems you can throttle the engine to make it run at different speeds. Without the moving parts, brothers engine ran at just one speed throughout the flights of 1903.