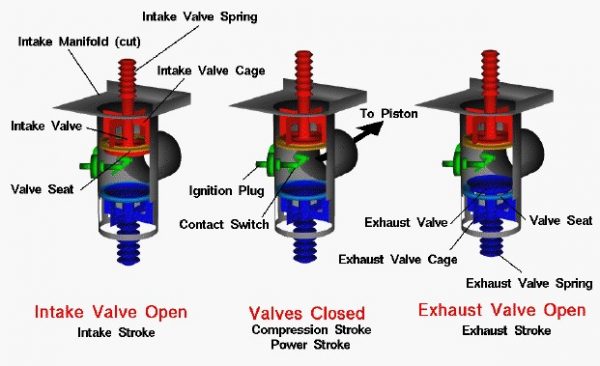 This is a computer drawing of a combustion chamber of the Wright brothers’ 1903 aircraft engine. This engine powered the first, heavier than air, self-propelled, maneuverable, piloted aircraft; the Wright 1903 Flyer, flown at Kitty Hawk, North Carolina, in December, 1903. To generate thrust for their aircraft, the brothers used twin, counter-rotating propellers at the rear of the aircraft. To turn the propellers, the brothers designed and built a water-cooled, gasoline powered, four-stroke, four cylinder, internal combustion engine.

The middle figure shows the parts during the compression and power strokes of the cycle. The intake valve is now closed and the chamber forms a totally closed vessel with the piston and cylinder. Protruding through the walls of the chamber are the ignition plug (green) and contact switch. The switch is normally held open. The switch is closed against the plug, and opens quickly to generate a spark to ignite the fuel/air mixture during the combustion process. The figure on the right shows the parts during the exhaust stroke. The exhaust valve (blue), like the intake valve, is normally held snug against its valve seat by the exhaust valve spring. During the exhaust stroke, the valve is pushed open by a cam-driven rocker arm. Like the intake valve, the exhaust valve is held in place by a valve cage which wraps around the valve stem. When the exhaust valve is opened, the hot exhaust gas is pushed through the open valve and exits the engine. The movement of all these parts is coordinated by the timing system and is shown in this animation: