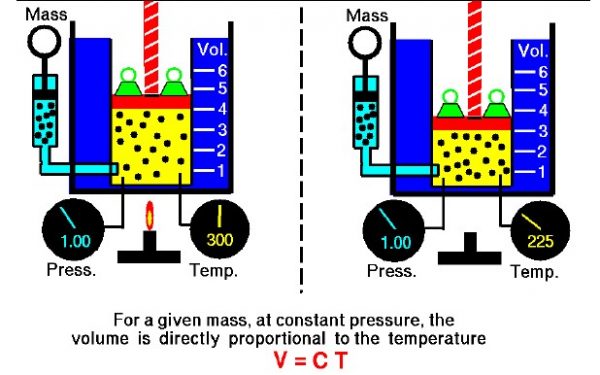 Air is a gas which has various properties that we can observe with our senses, including the gas pressure, temperature (T), mass, and the volume (V) that contains the gas. Careful, scientific observation has determined that these variables are related to one another and that the values of these properties determine the state of the gas.

The relationship between temperature and volume, at a constant number of moles and pressure, is called Charles and Gay-Lussac’s Law in honor of the two French scientists who first investigated this relationship. Charles did the original work, which was verified by Gay-Lussac. They observed that if the pressure is held constant, the volume is equal to a constant times the temperature. For example, suppose we have a theoretical gas confined in a jar with a piston at the top. The initial state of the gas has a volume equal to 4.0 cubic meters, and the temperature is 300 degrees Kelvin. With the pressure and number of moles held constant, the burner has been turned off and the gas is allowed to cool to 225 degrees Kelvin. (In an actual experiment, a cryogenic ice-bath would be required to obtain these temperatures.) As the gas cools, the volume decreases to 3.0 cubic meters. The volume divided by the temperature remains a constant (4/300 = 3/225 ).