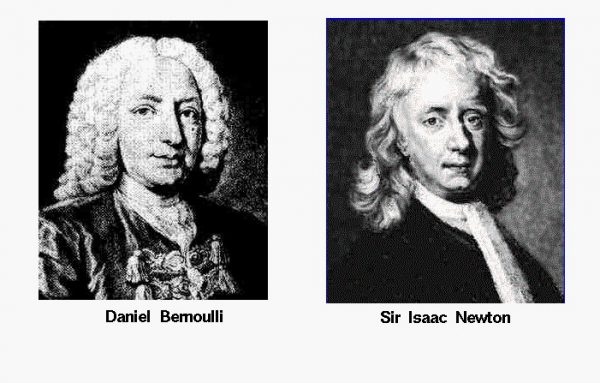 Lift is the force that holds an aircraft in the air. How is lift generated? There are many explanations for the generation of lift found in encyclopedias, in basic physics textbooks, and on Web sites. Unfortunately, many of the explanations are misleading and incorrect. Theories on the generation of lift have become a source of great controversy and a topic for heated arguments for many years.

The proponents of the arguments usually fall into two camps: (1) those who support the “Bernoulli” position that lift is generated by a pressure difference across the wing, and (2) those who support the “Newton” position that lift is the reaction force on a body caused by deflecting a flow of gas. Notice that we place the names in quotation marks because neither Newton nor Bernoulli ever attempted to explain the aerodynamic lift of an object. The names of these scientists are just labels for two camps.

Contributions of Bernoulli and Newton

Looking at the lives of Bernoulli and Newton we find more similarities than differences. On the figure at the top of this page we show portraits of Daniel Bernoulli, on the left, and Sir Isaac Newton, on the right. Newton worked in many areas of mathematics and physics. He developed the theories of gravitation in 1666, when he was only 23 years old. Some twenty years later, in 1686, he presented his three laws of motion in the Principia Mathematica Philosophiae Naturalis . He and Gottfried Leibnitz are also credited with the development of the mathematics of Calculus. Bernoulli also worked in many areas of mathematics and physics and had a degree in medicine. In 1724, at age 24, he had published a mathematical work in which he investigated a problem begun by Newton concerning the flow of water from a container and several other problems involving differential equations. In 1738, his work Hydrodynamica was published. In this work, he applied the conservation of energy to fluid mechanics problems.

Which camp is correct? How is lift generated?

What is the argument?

The real details of how an object generates lift are very complex and do not lend themselves to simplification. For a gas, we have to simultaneously conserve the mass, momentum, and energy in the flow. Newton’s laws of motion are statements concerning the conservation of momentum. Bernoulli’s equation is derived by considering conservation of energy. So both of these equations are satisfied in the generation of lift; both are correct. The conservation of mass introduces a lot of complexity into the analysis and understanding of aerodynamic problems. For example, from the conservation of mass, a change in the velocity of a gas in one direction results in a change in the velocity of the gas in a direction perpendicular to the original change. This is very different from the motion of solids, on which we base most of our experiences in physics. The simultaneous conservation of mass, momentum, and energy of a fluid (while neglecting the effects of air viscosity) are called the Euler Equations after Leonard Euler. Euler was a student of Johann Bernoulli, Daniel’s father, and for a time had worked with Daniel Bernoulli in St. Petersburg. If we include the effects of viscosity, we have the Navier-Stokes Equations which are named after two independent researchers in France and in England. To truly understand the details of the generation of lift, one has to have a good working knowledge of the Euler Equations.