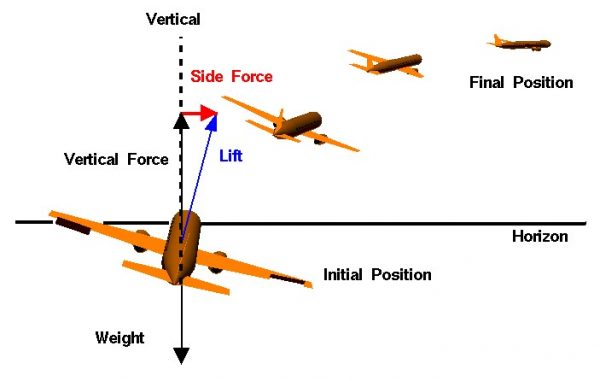 A fundamental aircraft motion is a banking turn. This maneuver is used to change the aircraft heading. The turn is initiated by using the ailerons or spoilers to roll, or bank, the aircraft to one side. On the figure, the airliner is banked to the right by lowering the left aileron and raising the right aileron. The lift of the wings of the aircraft is a vector quantity which is always directed perpendicular to the flight path and perpendicular to the wings generating the lift. As the aircraft is rolled, the lift vector is tilted in the direction of the roll. We can break the lift vector into two components. One component is vertical and opposed to the weight which is always directed towards the center of the earth. The other component is an unopposed side force which is in the direction of the roll, and perpendicular to the flight path.