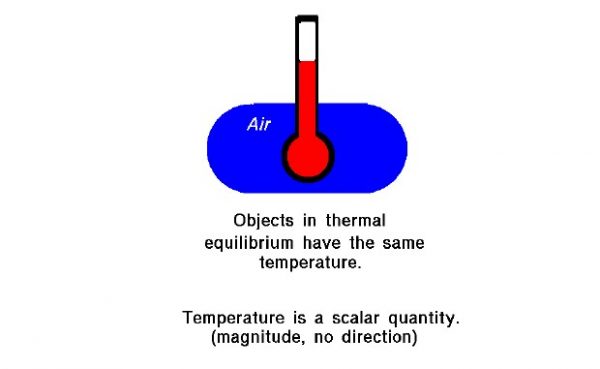 Scientists, however, must be more precise than simply describing an object as “hot” or “cold.” An entire branch of physics, called thermodynamics, is devoted to studying the temperature of objects and the flow of heat between objects of different temperatures. We are including some fundamentals of thermodynamics at the Wright brothers web site to help you better understand the fundamentals of engines.

Considering the large scale effects, the temperature of a gas is something that we can determine qualitatively with our senses. We can sense that one gas is hotter than another gas and therefore has a higher temperature. But to determine the temperature quantitatively, to assign a number, we must use some principles from thermodynamics:

Of course, you can have temperatures below the freezing point of water and these are assigned negative numbers. When scientists began to study the coldest possible temperature, they determined an absolute zero at which molecular kinetic energy is a minimum (but not strictly zero!). They found this value to be at -273.16 degrees C. Using this point as the new zero point we can define another temperature scale called the absolute temperature. If we keep the the size of a single degree to be the same as the Celsius scale, we get a temperature scale which has been named after Lord Kelvin and designated with a K. Then:

There is a similar absolute temperature corresponding to the Fahrenheit degree. It is named after the scientist Rankine and designated with an R.

Absolute temperatures are used in the equation of state and the derivation of the state variables enthalpy and entropy, which are used to solve gas dynamics problems. Temperature, like pressure, is a scalar quantity; it has no direction associated with it. It has just a single value at every location in a gas. The value can change from location to location, but there is no direction connected to the temperature.