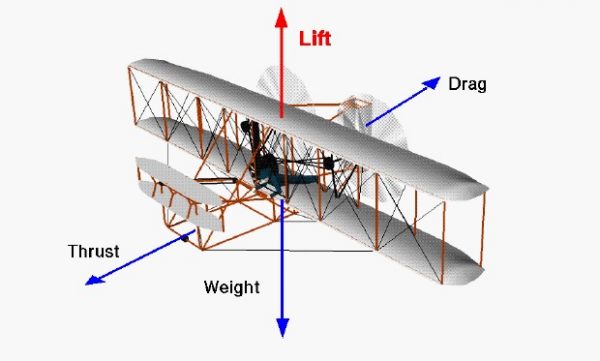 Lift is the force that holds an aircraft in the air. Lift can be generated by any part of the airplane, but most of the lift on an airplane is generated by the wings.

How is Lift Generated?

There are many explanations for the generation of lift found in encyclopedias, in basic physics textbooks, and on Web sites. Unfortunately, many of the explanations are misleading and incorrect. Theories on the generation of lift have become a source of great controversy and a topic for heated arguments for many years. One of the most popular incorrect theories states that the upper surface of an airfoil is shaped longer than the lower surface so that the flow over the top travels faster to reach the trailing edge at the same time. The higher velocity produces lower pressure according to Bernoulli’s equation and the difference in pressure produces the lift. However, if we look at the airfoil shapes used by the Wright brothers, we see that they are thin curved plates.

Lift occurs when a flow of gas is turned by a solid object. The flow is turned in one direction, and the lift is generated in the opposite direction, according to Newton’s Third Law of action and reaction. Because air is a gas and the molecules are free to move about, any solid surface can deflect a flow. For an airfoil, both the upper and lower surfaces contribute to the flow turning.

No Fluid, No Lift

Lift is a mechanical force. It is generated by the interaction and contact of a solid body with a fluid (liquid or gas). It is not generated by a force field, in the sense of a gravitational field, or an electromagnetic field, where one object can affect another object without being in physical contact. For lift to be generated, the solid body must be in contact with the fluid: no fluid, no lift. [The space shuttle does not stay in space because of lift from its wings but because of orbital mechanics related to its speed. Space is (nearly) a vacuum. Without air, there is no lift generated by the wings.]

No Motion, No Lift

Lift is generated by the difference in velocity between the solid object and the fluid. There must be motion between the object and the fluid: no motion, no lift. It makes no difference whether the object moves through a static fluid, or the fluid moves past a static solid object. For a kite, the lift force is generated by the wind blowing over a surface that is fixed in space. Lift acts perpendicular to the fluid motion while drag acts in the direction opposed to the motion.

There are many factors that affect the amount of lift generated by an object. We can express the relation between these factors and the generated lift by a mathematical lift equation. At the time of the Wright brothers a slightly different version of the lift equation was used, but both old and new version of the equation express the dependence of lift on the square of the velocity, the surface area, the shape of the object, inclination of the object to the flow, and the properties of the air.