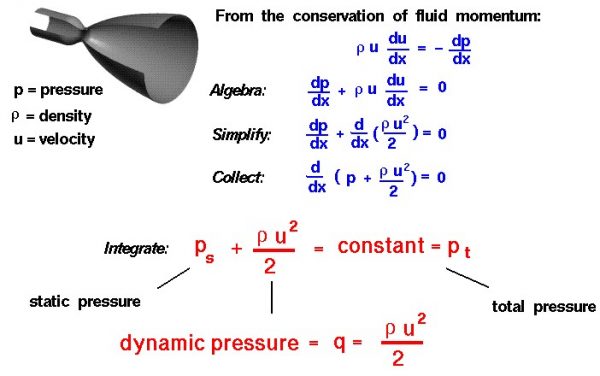 An important property of any gas is its pressure. Because understanding what pressure is and how it works is so fundamental to the understanding of aerodynamics and propulsion, we are including several slides on pressure in the Beginner’s Guide.

There are two ways to look at pressure: (1) the small-scale action of individual air molecules or (2) the large-scale action of a large number of molecules. On the small scale, from the kinetic theory of gases, a gas is composed of a large number of molecules that are very small relative to the distance between molecules. The molecules of a gas are in constant, random motion and frequently collide with each other and with the walls of any container. During collisions with the walls, there is a change in velocity and therefore a change in the momentum of the molecules. The change in momentum produces a force on the walls which is related to the gas pressure. The pressure of a gas is a measure of the average linear momentum of the moving molecules of a gas. On the large scale, the pressure of a gas is a state variable, like the temperature and the density. The change in pressure during any process is governed by the laws of thermodynamics. Although pressure itself is a scalar quantity, we can define a pressure force to be equal to the pressure (force/area) times the surface area in a direction perpendicular to the surface. If gas is static and not flowing, the measured pressure is the same in all directions. But if the gas is moving, the measured pressure depends on the direction of motion. This leads to the definition of dynamic pressure.

To understand dynamic pressure, we begin with a one-dimensional version of the conservation of linear momentum for a fluid.

where r is the density of the gas, p is the pressure, x is the direction of the flow, and u is the velocity in the x-direction. Performing a little algebra:

For a constant density (incompressible flow) we can take the “r * u” term inside the differential:

This equation looks exactly like the incompressible form of Bernoulli’s equation. Each term in this equation has the dimensions of a pressure (force/area); ps is the static pressure, the constant pt is called the total pressure, and

is called the dynamic pressure because it is a pressure term associated with the velocity u of the flow. Dynamic pressure is often assigned the letter q in aerodynamics: