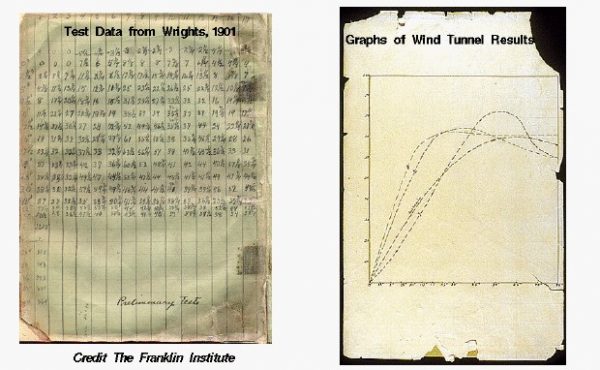 During the fall of 1901, the brothers began to question the aerodynamic data on which they had based the design of their 1900 and 1901 gliders. They decided to measure their own values of lift and drag with a series of wind tunnel tests. To measure the lift and drag, the brothers built small models of their wing designs and placed them on a measuring device called a balance. There were two balances, one for lift and the other for drag. They would test each model on both balances to determine the effect of design variables on lift and drag. Most of the models were designed to perform a parametric study by changing the value of only one design variable between models. Then by comparing the performance of the two models they could determine the effect of the single changed variable on lift and drag.

To obtain data, one of the brothers would look through the view window on the top of the wind tunnel and record the angles on the balance output dial in the test section. On the left side of the figure, we see the actual data as recorded by the Wright brothers into their data book. These photos are provided by the Franklin Institute where the actual data books are kept. After recording the raw data, the brothers had to do some additional math to produce usable lift and drag coefficients from the output dial measurements. Engineers call this step data reduction. Finally, the reduced data was plotted on graph paper, as shown at the right of the figure. This allows a quick comparison between the results of several tests. Engineers still use graphs to present data. You can duplicate the wind tunnel tests of the Wright brothers by using our interactive wind tunnel simulation. There are 30 different models from which to choose and you can test each model on both balances and record and reduce your data the same way that the brothers did it in 1901.

At the end of their 1901 wind tunnel tests, the Wright brothers had the most detailed data in the world for the design of aircraft wings. What did the data tell them?

In the following discussions, the word performance indicates a combination of the effects of lift and drag, normally expressed as the drag to lift ratio. A low value is better than a high value of this parameter.