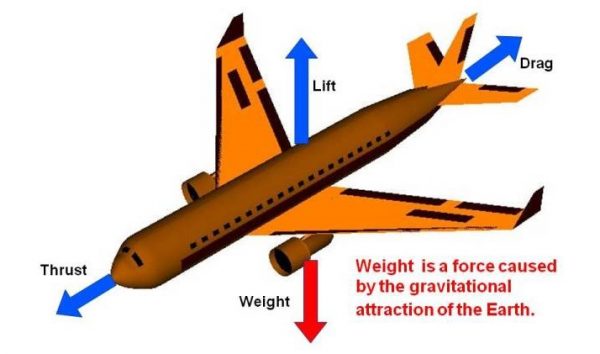 Weight is the force generated by the gravitational attraction of the earth on the airplane. We are more familiar with weight than with the other forces acting on an airplane, because each of us have our own weight which we can measure every morning on the bathroom scale. We know when one thing is heavy and when another thing is light. But weight, the gravitational force, is fundamentally different from the aerodynamic forces, lift and drag. Aerodynamic forces are mechanical forces and the airplane has to be in physical contact with the the air which generates the force. The gravitational force is a field force; the source of the force does not have to be in physical contact with the object to generate a pull on the object.

The nature of the gravitational force has been studied by scientists for many years and is still being investigated by theoretical physicists. For an object the size of an airplane, the descriptions given three hundred years ago by Sir Isaac Newton work quite well. Newton developed his theory of gravitation when he was only 23 years old and published the theories with his laws of motion some years later. The gravitational force between two objects depends on the mass of the objects and the inverse of the square of the distance between the objects. Larger objects create greater forces and the farther apart the objects are the weaker the attraction. Newton was able to express the relationship in a single weight equation.

Flying involves two major problems; overcoming the weight of an object by some opposing force, and controlling the object in flight. Both of these problems are related to the object’s weight and the location of the center of gravity. The dream remains that, if we could really understand gravity, we could create anti-gravity devices which would revolutionize travel through the sky. Unfortunately, anti-gravity devices only exist in science fiction. Machines like airplanes, or magnetic levitation devices, create forces opposed to the gravitational force, but they do not block out or eliminate the gravitational force.