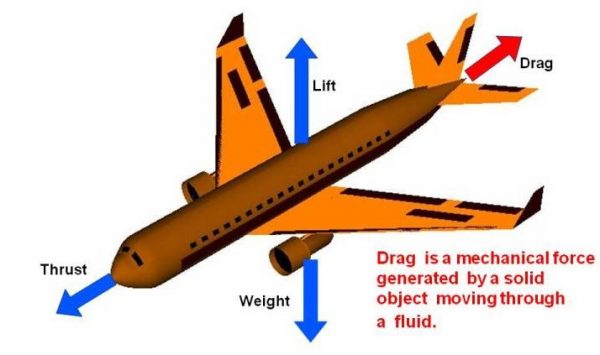 Drag is the aerodynamic force that opposes an aircraft’s motion through the air. Drag is generated by every part of the airplane (even the engines!). How is drag generated?

Drag is a mechanical force. It is generated by the interaction and contact of a solid body with a fluid (liquid or gas). It is not generated by a force field, in the sense of a gravitational field or an electromagnetic field, where one object can affect another object without being in physical contact. For drag to be generated, the solid body must be in contact with the fluid. If there is no fluid, there is no drag. Drag is generated by the difference in velocity between the solid object and the fluid. There must be motion between the object and the fluid. If there is no motion, there is no drag. It makes no difference whether the object moves through a static fluid or whether the fluid moves past a static solid object.

Drag is a force and is therefore a vector quantity having both a magnitude and a direction. Drag acts in a direction that is opposite to the motion of the aircraft. Lift acts perpendicular to the motion. There are many factors that affect the magnitude of the drag. Many of the factors also affect lift but there are some factors that are unique to aircraft drag.

We can also think of drag as aerodynamic resistance to the motion of the object through the fluid. This source of drag depends on the shape of the aircraft and is called form drag. As air flows around a body, the local velocity and pressure are changed. Since pressure is a measure of the momentum of the gas molecules and a change in momentum produces a force, a varying pressure distribution will produce a force on the body. We can determine the magnitude of the force by integrating (or adding up) the local pressure times the surface area around the entire body. The component of the aerodynamic force that is opposed to the motion is the drag; the component perpendicular to the motion is the lift. Both the lift and drag force act through the center of pressure of the object.

There is an additional drag component caused by the generation of lift. Aerodynamicists have named this component the induced drag. It is also called “drag due to lift” because it only occurs on finite, lifting wings. Induced drag occurs because the distribution of lift is not uniform on a wing, but varies from root to tip. For a lifting wing, there is a pressure difference between the upper and lower surfaces of the wing. Vortices are formed at the wing tips, which produce a swirling flow that is very strong near the wing tips and decreases toward the wing root. The local angle of attack of the wing is increased by the induced flow of the tip vortex, giving an additional, downstream-facing, component to the aerodynamic force acting on the wing. The force is called induced drag because it has been “induced” by the action of the tip vortices. The magnitude of induced drag depends on the amount of lift being generated by the wing and on the distribution of lift across the span. Long, thin (chordwise) wings have low induced drag; short wings with a large chord have high induced drag. Wings with an elliptical distribution of lift have the minimum induced drag. Modern airliners use winglets to reduce the induced drag of the wing.

Two additional sources of drag are wave drag and ram drag. As an aircraft approaches the speed of sound, shock waves are generated along the surface. The shock waves produce a change in static pressure and a loss of total pressure. Wave drag is associated with the formation of the shock waves. The magnitude of the wave drag depends on the Mach number of the flow. Ram drag is produced when free stream air is brought inside the aircraft. Jet engines bring air on board, mix the air with fuel, burn the fuel, then exhausts the combustion products to produce thrust. If we look at the basic thrust equation, there is a mass flow times entrance velocity term that is subtracted from the gross thrust. This “negative thrust” term is the ram drag. Cooling inlets on the aircraft are also sources of ram drag.