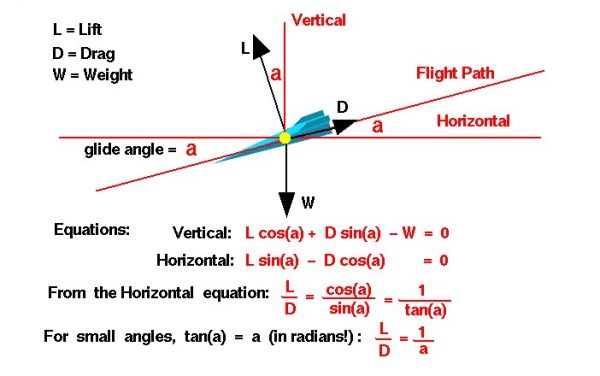 This slide shows the balance of forces on a descending glider. There are three forces acting on the glider; weight, lift, and drag. Forces are vector quantities having both a magnitude and a direction. The magnitude of the weight is given by the weight equation and depends on the mass of the aircraft and its payload. The direction of the weight is always towards the center of the earth. On the figure, the direction is along the vertical axis, pointed towards the bottom of the figure. The magnitude of the lift is given by the lift equation and depends on several factors. The lift is directed perpendicular to the flight path which is shown as a thin red line which fall to the left on the figure. The magnitude of the drag is given by the drag equation and depends on factors associated with the design. The drag is directed along the flight path opposed to the motion. A horizontal, thin red line has been drawn parallel to the ground and through the center of gravity of the glider. The flight path of the glider crosses the horizontal at an angle a called the glide angle. Using some geometry theorems on angles, perpendicular lines, and parallel lines, we see the glide angle “a” also defines the angle between the lift and the vertical, and between the drag and the horizontal.

the lift divided by the drag is equal to the inverse of the glide angle for small angles.