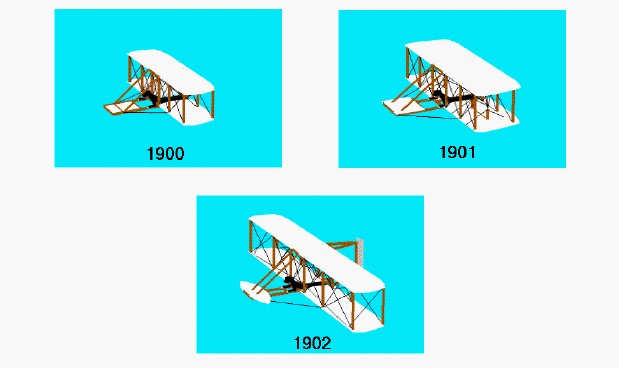 The brothers recognized that control of the flying aircraft was the most crucial and hardest problem to solve. From the observation of soaring birds, they believed that they could obtain roll control by warping, or changing the shape, of a portion of the wing. In 1899 they tested some of their ideas on a large box kite flown in their home town of Dayton, Ohio. By using multiple control lines, the flyer could twist the wing tips of the kite and make it move from side to side at will.

In 1900, the brothers decided to further test their theories using an aircraft designed to carry a man. The aircraft was designed with two wings each having a 20 foot wing span and a 5 foot chord. A forward stabilizer, called a canard, was used for pitch control. The aircraft weighed about 50 pounds without the pilot, and 200 pounds with the pilot. Kitty Hawk, North Carolina, was chosen as the test site because of its constant strong winds coming in from the sea and sand dunes for soft landings. When the brothers arrived in North Carolina, they could only obtain 17 foot long spars, so the actual aircraft was smaller than their original design. For most of its flights this aircraft was flown as a kite. On the last day of the 1900 season, the aircraft was flown as a glider for about a dozen flights with Wilbur as the pilot. The aircraft successfully demonstrated roll control through wing warping.

In 1901, the brothers returned to Kitty Hawk with a new aircraft which they had built at their bicycle shop in Dayton, Ohio. Their new aircraft had the same basic design as the 1900 aircraft, but was larger to provide more lift to carry a pilot in lighter winds. It had a 22 foot wing span, a seven foot chord, a variable elevator canard for pitch control, and weighed about a hundred pounds without the pilot. The aircraft was flown frequently up to 300 feet in a single glide. But the aircraft did not perform as well as the brothers had originally expected. The aircraft only developed 1/3 of the lift which was predicted by the lift equation using Lilienthal’s lift data.

The brothers modified the curvature of the wing but this only slightly improved the flying characteristics. During their test flights the brothers first encountered wing stalls in which the lift would suddenly decrease and the aircraft would settle back to earth. They also encountered an effect known as adverse yaw. On some flights, when the wings were warped to produce a roll which should result in a curving flight path in the direction of the lower wing, the drag increased on the upper wing and the aircraft would twist in the opposite direction. The air speed decreased and the plane settled back to the ground. At the end of 1901, the brothers were frustrated and Wilbur remarked that it would be another fifty years before humans would learn to fly.

During the winter of 1901, the brothers began to question the aerodynamic data on which they were basing their designs. They built their own wind tunnel, one of the first tunnels built in the United States, and began to test their own models to accurately determine lift and drag of various wing designs. They developed two ingenious balance systems, one for lift and the other for drag to compare the performance of different models. They tested over fifty different wing and airfoil sections in different combinations to improve the performance of their gliders They discovered the importance of wing planform shape on overall wing performance. Shape effects accounted for some of the differences from Lilienthal’s results. They also calculated a more accurate value for the Smeaton pressure coefficient based on their flight tests. The Smeaton pressure coefficient was the reference upon which all published aerodynamic was based. At the end of 1901, the brothers possessed the world’s best aerodynamic data for the design of glider wings.

In 1902, they returned to Kitty Hawk with a new aircraft based on their new data. This aircraft had nearly the same wing area and weight of the 1901 aircraft, but the wings were long and thin to reduce drag. The reduced drag had increased the L/D ratio of the aircraft which allowed for a more shallow glide angle and longer flights. It had a 32 foot wing span, a five foot chord, the canard elevator, a new movable rudder at the rear, and it weighed about a hundred and fifteen pounds without the pilot. The rudder was installed to overcome the adverse yaw problem. The movable rudder was coordinated with the wing warping to keep the nose of the aircraft pointed into the curved flight path. With this new aircraft, the brothers completed over 300 flights with some flights greater than 650 feet in length. This machine was the first aircraft that had active controls for all three axis; roll, pitch and yaw. At the end of 1902, the Wright brothers were the two most experienced glider pilots in the world. The stage was now set for the development of powered aircraft.