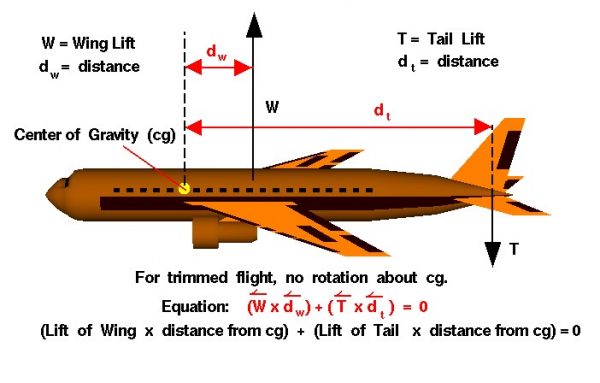 Let us look carefully at the torques produced by the wing and the tail. The torque from the wing TW is equal to the lift of the wing W times the distance from the cg to the center of pressure of the wing dw.

In trimmed flight, these two torques are equal:

The torque equation, as written here, is a vector equation. All of the quantities are vector quantities having a magnitude and a direction. If the distances are both positive (same side of the center of gravity), then the direction of the tail force must be different than the direction of the wing force to produce no net torque or rotation. However, if the distance to the tail were negative, then the lift of the of the tail could be positive and there would be no net torque. A negative distance to the tail would imply that the tail is on the front of the aircraft, ahead of the center of gravity. A tail at the front of the aircraft is called a canard and was the configuration first used by the Wright brothers.