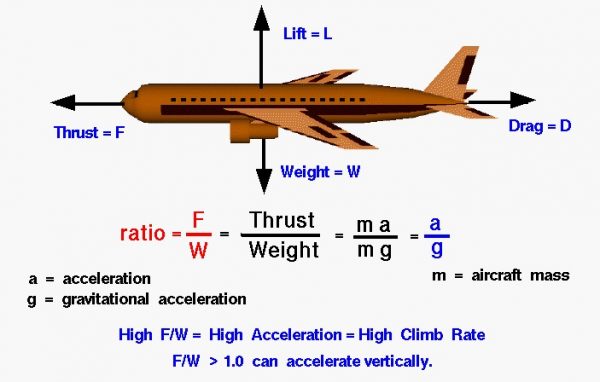 There are four forces that act on an aircraft in flight: lift, weight, thrust, and drag. Forces are vector quantities having both a magnitude and a direction. The motion of the aircraft through the air depends on the relative magnitude and direction of the various forces. The weight of an airplane is determined by the size and materials used in the airplane’s construction and on the payload and fuel that the airplane carries. The weight is always directed towards the center of the earth. The thrust is determined by the size and type of propulsion system used on the airplane and on the throttle setting selected by the pilot. Thrust is normally directed forward along the center-line of the aircraft. Lift and drag are aerodynamic forces that depend on the shape and size of the aircraft, air conditions, and the flight velocity. Lift is directed perpendicular to the flight path and drag is directed along the flight path.

If we consider a horizontal acceleration and neglect the drag the net external force is the thrust F. From the Newtonian weight equation:

where W is the weight and g is the gravitational constant equal to 32.2 ft/sec^s in English units and 9.8 m/sec^s in metric units. Solving for the mass:

and substituting in the force equation: