Here’s a JavaScript calculator which will solve the equations presented on this page: 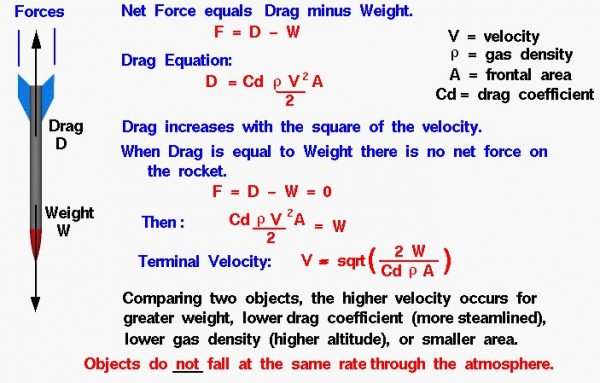 An object which is falling through the atmosphere is subjected to two external forces. One force is the gravitational force, expressed as the weight of the object. The other force is the air resistance, or drag of the object. If the mass of an object remains constant, the motion of the object can be described by Newton’s second law of motion, force F equals mass m times acceleration a:

which can be solved for the acceleration of the object in terms of the net external force and the mass of the object:

Weight and drag are forces which are vector quantities. The net external force F is then equal to the difference of the weight W and the drag D

The acceleration of a falling object then becomes:

The magnitude of the drag is given by the drag equation. Drag D depends on a drag coefficient Cd, the atmospheric density r, the square of the air velocity V, and some reference area A of the object.

On the figure at the top, the density is expressed by the Greek symbol “rho”.

Drag increases with the square of the speed. So as an object falls, we quickly reach conditions where the drag becomes equal to the weight, if the weight is small. When drag is equal to weight, there is no net external force on the object and the vertical acceleration goes to zero. With no acceleration, the object falls at a constant velocity as described by Newton’s first law of motion. The constant vertical velocity is called the terminal velocity .

Solving for the vertical velocity V, we obtain the equation

The chemistry of the atmosphere and the gravitational constant of a planet affects the terminal velocity. You select the planet using the choice button at the top left. You can perform the calculations in English (Imperial) or metric units. You must specify the weight or mass of your object. You can choose to input either the weight on Earth, the local weight on the planet, or the mass of the object. Then you must specify the cross sectional area and the drag coefficient. Finally you must specify the atmospheric density. We have included models of the atmospheric density variation with altitude for Earth and Mars in the calculator. When you have the proper test conditions, press the red “Compute” button to calculate the terminal velocity.

The terminal velocity equation tells us that an object with a large cross-sectional area or a high drag coefficient falls slower than an object with a small area or low drag coefficient. A large flat plate falls slower than a small ball with the same weight. If we have two objects with the same area and drag coefficient, like two identically sized spheres, the lighter object falls slower. This seems to contradict the findings of Galileo that all free falling objects fall at the same rate with equal air resistance. But Galileo’s principle only applies in a vacuum, where there is NO air resistance and drag is equal to zero.