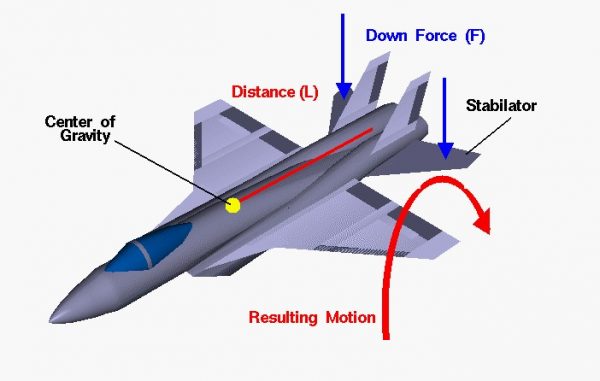 At the rear of the fuselage of most aircraft one finds a horizontal stabilizer and an elevator to provide stability and control of the up-and-down, or pitching, motion of the aircraft nose. On many fighter planes, in order to meet their high maneuvering requirements, the stabilizer and elevator are combined into one large moving surface called a stabilator. Because the stabilator moves, it varies the amount of force generated by the tail surface and is used to generate and control the pitching motion of the aircraft. There is usually a stabilator on each side of the fuselage and they work in pairs; when the right stabilator goes up, the left stabilator also goes up. This slide shows what happens when the pilot deflects the stabilators.

Let’s investigate how a stabilator works by using a Java simulator.

The stabilators work by changing the angle of attack of the horizontal stabilizer. As described on the inclination effects slide, changing the angle of attack of an airfoil changes the amount of lift generated by the foil. With greater downward deflection of the leading edge, lift increases in the downward direction. With greater upward deflection, lift increases in the upward direction. The lift force (F) is applied at the center of pressure of the the stabilator which is some distance (L) from the aircraft center of gravity. This creates a torque

on the aircraft and the aircraft rotates about its center of gravity. The pilot can use this ability to make the airplane loop or dive.

You can change the stabilator setting by using the slider at the right.

On most aircraft, the horizontal stabilizer and elevator are separate pieces with the elevator being connected to the stabilizer by a hinge. These aircraft rely on changing the shape of the tail airfoil to produce a change in the down force for control. On some aircraft, the pitch stability and control is provided by a canard which is a horizontal surface placed forward of the center of gravity (a tail in the front). The Wright brother’s 1903 flyer used a forward elevator for pitch control.