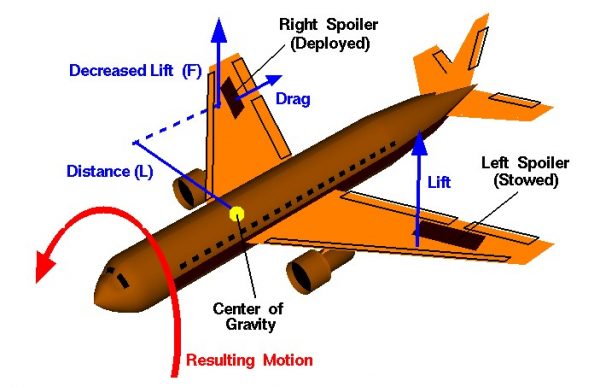 Spoilers Deployed on Both Wings

When the pilot activates the spoilers, the plates flip up into the air stream. The flow over the wing is disturbed by the spoiler, the drag of the wing is increased, and the lift is decreased. Spoilers can be used to “dump” lift and make the airplane descend; or they can be used to slow the airplane down as it prepares to land. When the airplane lands on the runway, the pilot usually brings up the spoilers to kill the lift, keep the plane on the ground, and make the brakes work more efficiently. The friction force between the tires and the runway depends on the “normal” force, which is the weight minus the lift. The lower the lift, the better the brakes work. The additional drag of the spoilers also slows the plane down.

Let’s investigate how the spoilers work by using a Java simulator.

You can deploy the spoilers by using the slider at the bottom.

Spoiler Deployed on Only One Wing

A single spoiler is used to bank the aircraft; to cause one wing tip to move up and the other wing tip to move down. The banking creates an unbalanced side force component of the large wing lift force which causes the aircraft’s flight path to curve. (Airplanes turn because of banking, not because of the force generated by the rudder.

On the figure, the airplane’s right wing spoiler is deployed, while the left wing spoiler is stored flat against the wing surface (as viewed from the rear of the airplane). The flow over the right wing will be disturbed by the spoiler, the drag of this wing will be increased, and the lift will decrease relative to the left wing. The lift force (F) is applied at the center of pressure of the segment of the wing containing the spoiler. This location is some distance (L) from the aircraft center of gravity which creates a torque

[You can also test the roll effect yourself using a wooden glider. Just put some control tabs on the top of both wings. Bend one tab up and leave the other flat, and you will see the airplane roll when it is flown. The roll will be in the direction of the tab that is pulled up. The tabs can be yellow stick-ums or tape attached to the wings near the center of the chord (a straight line connecting the leading and trailing edges of an airfoil).]

When you travel on an airliner, watch the wings during turns. The pilot rolls the aircraft in the direction of the turn. You will probably be surprised at how little deflection is necessary to bank (roll) a large airliner. But be warned that there is a possible source of confusion on some airliners. We have been talking about rolling the aircraft by using a spoiler near the center of the wing chord to decrease the lift of one wing. On most airliners, the aircraft is rolled by using ailerons to increase the lift on one wing and decrease the lift on the other wing. This produces an unbalanced force, which causes the roll. You can tell whether an airliner is using spoilers or ailerons by noticing where the moving part is located. At the trailing edge, it’s an aileron; between the leading and trailing edges, it’s a spoiler. (Now you can dazzle the person sitting next to you on the plane!)