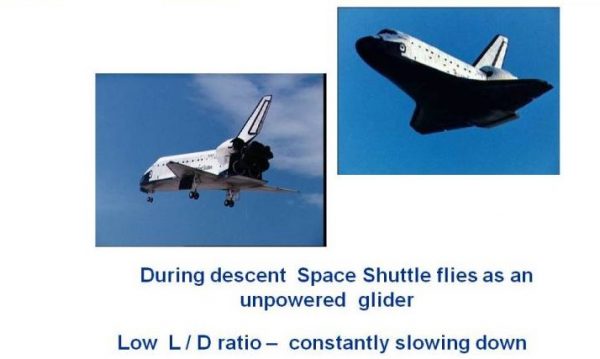 There are many different types of glider aircraft. Paper airplanes are the simplest aircraft to build and fly, and students can learn the basics of aircraft motion by flying paper airplanes. Toy gliders, made of balsa wood or Styrofoam, are an inexpensive way for students to study the basics of aerodynamics, while having fun building and flying the aircraft. Hang-gliders are piloted aircraft that are launched by leaping off the side of a hill or by being towed aloft. Piloted gliders are launched by ground based catapults, or are towed aloft by a powered aircraft then cut free to glide for hours over many miles. The Wright Brothers perfected the design of the first airplane and gained piloting experience through a series of glider flights from 1900 to 1903.

The Space Shuttle flies as a glider during reentry and landing. During ascent, thrust is provided by the three Space Shuttle Main Engines (SSME’s) at the base of the orbiter and the two Solid Rocket Boosters (SRB’s) that are joined to the orange External Fuel Tank (ET). The solids are jettisoned about two minutes into the ascent, and the fuel tank is jettisoned as the shuttle enters Earth orbit. So there are no propellants available to the SSME’s during descent and, though the engines are still present, the shuttle returns as an unpowered glider. Piloted high performance gliders are designed with a high L/D ratio (~70) to permit a low glide angle and a long time aloft. The shuttle was designed with a low L/D ratio (~ 1) because during the descent the spacecraft must be slowed from about 17,300 mph to about 250 mph at landing.