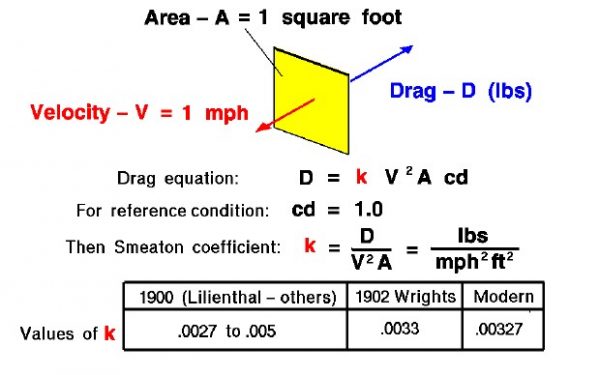 In 1899, when Wilbur Wright decided to “add my mite to help on the future worker who will attain final success” in flight, he wrote to the Smithsonian to obtain technical pamphlets on the state of the art in aerodynamics. He and Orville learned that there were mathematical equations which could be used to predict the amount of lift and drag that an object would generate.

Besides being hard to accurately measure, the factor presents some other problems for its users. The units given here are “mixed English”. The velocity is in miles per hour, the area in square feet, and the force in pounds (slugs * foot per second squared). This means that to use the quoted value of the factor in the given aerodynamic equations, one has to measure the velocity in miles per hour (and then square it) and the area is square feet. A metric version of the coefficient is also available, but the physical reference is different; a one meter square moving at one meter per second generates a drag force of .13 kilograms (force). Comparing with the modern dynamic pressure reference, the Smeaton coefficient is only good at one altitude. From the modern theory, we know that the aerodynamic forces depend on the density of the air, and the density varies with altitude. Using the Smeaton reference, a different value for the coefficient would be required at each altitude, because the drag of a flat plate changes with altitude. Fortunately, the early Wright aircraft could not climb high enough for the change in air density to make a difference.

When the Wrights began to design the 1900 aircraft, they used values for the lift coefficient based on the work by Lilienthal. Lilienthal and the Wrights used the .005 value for the pressure factor. During the kite and glider experiments of 1900 and 1901, the brothers measured the performance of their aircraft. Neither aircraft performed as well as predicted by the lift equation. The 1901 aircraft had been designed to lift itself (100 pounds) plus a pilot (150 pounds) when flown as a kite in a 15 mile per hour wind at 5 degrees angle of attack. But in flight, it could barely lift itself in a 15 mile per hour wind at a much higher angle of attack. So the brothers began to doubt the .005 value for the Smeaton coefficient. They determined that a value of .0033 more closely approximated their flight data.

We can derive the true value of the Smeaton coefficient by using the modern drag equation:

The drag equation states that drag (D) is equal to the drag coefficient (Cd) times the density of the air (r) times half of the square of the velocity (V) times the wing area (A). From the definition of the Smeaton coefficient:

Where we have used (U) for the velocity because this velocity is measured in miles per hour, while the (V) of the modern drag equation is measured in feet per second. Substituting:

The Wright brothers were very close to this value using their experimental data.