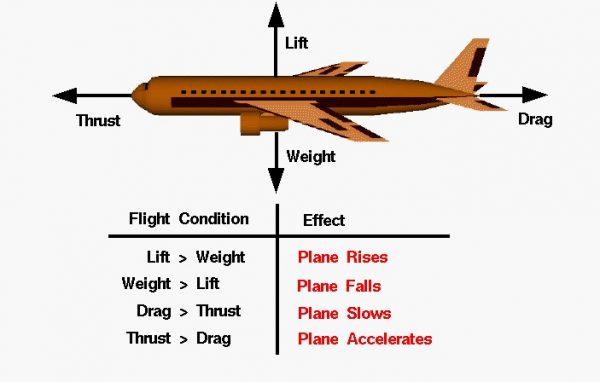 In an ideal situation, an airplane could sustain a constant speed and level flight in which the weight would be balanced by the lift, and the drag would be balanced by the thrust. The closest example of this condition is a cruising airliner. While the weight decreases due to fuel burned, the change is very small relative to the total aircraft weight. In this situation, the aircraft will maintain a constant cruise velocity as described by Newton’s first law of motion.

Motion of an Aircraft

If the weight is decreased while the lift is held constant, the airplane will rise:

If the lift is decreased while the weight is constant, the plane will fall:

Similarly, increasing the thrust while the drag is constant will cause the plane to accelerate:

And increasing the drag at a constant thrust will cause the plane to slow down: