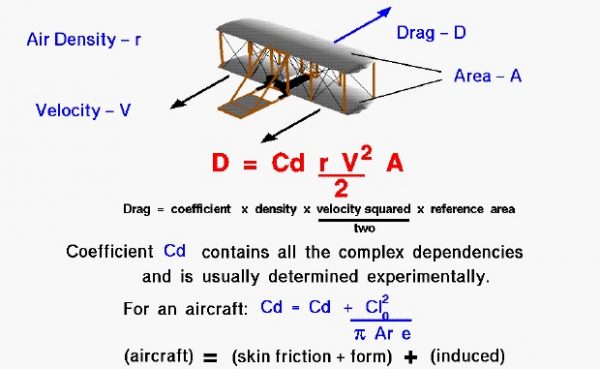 Between 1900 and 1905, the Wright brothers designed and built three unpowered gliders and three powered aircraft. As part of the design process, they had to make some mathematical estimates of the lift and drag of their vehicles. The Wright brothers were bicycle mechanics and had a good working knowledge of math and science. They knew about Newton’s laws of motion and about forces. They knew that they needed to generate enough aerodynamic lift to overcome the weight of their aircraft. They were also aware of mathematical equations which could be used to predict the amount of lift and drag that an object would generate.

The Wright brothers learned about induced drag the hard way. Following their first glider flights of 1900, they knew that they had to increase the size of their wings to allow flight in reasonable winds. For the 1901 aircraft they increased the chord of the wing but kept the span nearly the same. This produced a wing with an aspect ratio of 3.0 and high induced drag. The brothers had made mathematical predictions of the performance of their aircraft. But the 1901 aircraft did not meet their range predictions because of lower than expected lift and higher than expected drag. During the winter, with the aid of their wind tunnel, they began to understand the role of induced drag on their aircraft’s poor performance. They then designed the 1902 aircraft wing to have a longer span and shorter chord than the 1901 aircraft. The aspect ratio was changed to 6.0 with nearly the same wing area. By doubling the aspect ratio, the brothers cut the induced drag in half. The 1902 aircraft was able to meet their performance goals and they were able to attain glides of over 650 feet.

Remember that determining the drag is only a part of the design problem. You will find that a higher angle of attack produces more lift, but it also produces more drag. You will also find that increasing the wing area increases the lift. But in the total design, increasing wing area also increases the weight and the drag. Designers usually try to optimize the lift to drag ratio. This is an efficiency factor for the aircraft and inversely related to the glide angle. An aircraft with a high lift to drag ratio can glide a long distance while losing only a little altitude. The Wrights were aware that they needed both high lift and low drag.